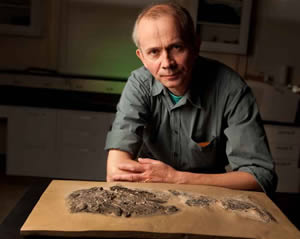 From Scotland’s Midland Valley to Wyoming’s Beartooth Butte to Grahamstown, South Africa, he scours sediments hundreds of millions of years old for the deepest branches of vertebrate evolution in the tree of life’s shadowy recesses. These branches determined the basic body plan of jawed vertebrates—including humans and all other four-limbed creatures—when they sprouted more than 300 million years ago.

From Scotland, Coates has collected some of the oldest-known fossil shark specimens, now housed in his Culver Hall laboratory. Shark skeletons are made of cartilage rather than bone, rendering their fossils rather scarce.

In Wyoming, Coates and Matt Friedman, PhD’09, excavated a fossil coelacanth that demonstrates how problematic the term “living fossil” can be. The lobed fins of the 400-million-year-old fossil differ significantly from those of its living descendent.

And from South Africa, Coates and two colleagues discovered the oldest-known lamprey, a jawless vertebrate whose evolutionary lineage now stretches back at least 360 million years.

Stimulus for shark research Now Coates has launched a new project on the evolutionary origins of sharks with stimulus funds from the National Science Foundation. Sharks have drawn attention lately because of their vulnerability to over-fishing and for the ancient genetic underpinnings of their remarkably robust immune systems.

“The question is, what is primitive about living sharks?” said Coates, a Professor in Organismal Biology & Anatomy. Marine biologists assume that modern sharks are primitive, but modern sharks look somewhat different from their strangely formed ancient ancestors. A shark called Akmonistion, for example, swam the oceans 320 million years ago, sporting a dorsal fin that resembled a tooth-studded ironing board.

“Sharks are charismatic and they get a lot of media attention, but we’ve got a very biased view of their abundance and diversity,” Coates said.

There are approximately 50,000 species of jawed vertebrates, such as humans and bony fishes, living today. But there are only 1,200 species of cartilaginous fish, including sharks, rays and ratfish.

“When you break down the numbers, there are about 400 species of shark that resemble the conventional idea of a shark, but 800 species of batoids—skates and rays. That’s where their diversity, such as it is, is locked up.”

The new shark project fits into the larger scheme of Coates’ efforts to marry the fossil and molecule data of early vertebrate evolution.

Assuming a constant rate of change over geologic time, the amount of shared DNA between any two related modern species provides the basis for calculating when their ancestors began evolving in different directions.

Molecular data typically suggest much older branching events, or evolutionary separation between lineages, than the fossil record. “You ought to expect that because the fossil record is always going to be incomplete. The fossils can only give you minimum estimates of branching dates in the history of life,” Coates said. “But you need fossils to calibrate molecular-clock-based methods.”

Coates is “one of the best in the business” at showing how paleontological data can be relevant to modern biological problems, said John A. Long, a paleontologist at the Natural History Museum of Los Angeles County.

"Michael Coates is brilliant at showing at every level how the value of fossils can still inform this modern molecular work, especially with respect to the development of patterns in the vertebrate body plan,” Long said.

Grotesque body plan Then came the earliest tetrapods, the four-limbed organisms, transitional between fish and amphibians, which emerged approximately 360 million years ago. Coates worked with Cambridge University’s Jennifer Clack to uncover and describe in detail the extraordinary anatomy of one of these early tetrapods, Acanthostega.

Acanthostega looked like “a large, grotesque salamander,” Coates said. It had legs and digits, with rudimentary ankles and wrists, but also internal gills and a large tail fin.

Acanthostega, along with new work by Coates and Clack on other previously discovered early tetrapods, contradicted long-held paleontological beliefs that early tetrapods all had five digits on each limb. But Acanthostega had eight, while other creatures of the same period had seven and six digits.

Coates brings his fossils to life with drawings and paintings that often appear in his scientific publications and those of others. Long’s book, The Rise of Fishes (1995), includes a color painting of an early fossil shark that his colleague rendered. Coates’s scientific illustrations, Long said, “are really quite exquisite.”