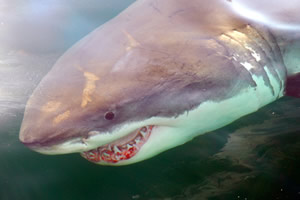 WOODS HOLE, Massachusetts -- A new study on white sharks in the western North Atlantic indicates they grow more slowly and mature much later than previously thought.

The findings, published online in Marine and Freshwater Research, present the first reliable growth curve for this species in the western North Atlantic. The results: males are sexually mature around age 26 and females around age 33, much later than currently accepted estimates of 4 to 10 years for males and 7-13 years for females.

"Using the longevity data obtained from our first study, we are now able to describe not just how long white sharks live, but also the growth rate for this species, which is remarkably slower than anybody thought," said Lisa Natanson, a fisheries biologist and shark researcher at NOAA's Northeast Fisheries Science Center and lead author of the study.

To construct the growth curve, researchers combined recently published information on white shark longevity with a further look at band pair counting on vertebral samples from 77 white sharks (Carcharodon carcharias), 41 male and 36 female. Band pairs, counted like tree rings, are alternating opaque and translucent deposits laid in sequence in shark vertebrae as the animal grows. Since the deposition rate may change over time, researchers must determine or validate the actual rate that the bands are deposited.

The research on longevity demonstrated that band pair counts were reliable up to 44 years of age, after which band pair counts underestimated ages that could exceed 73 years. The estimated age at maturity reported here could lead to new estimates of population replacement rates that are much slower than those used in the past.

Natanson and co-author Gregory Skomal of the Massachusetts Division of Marine Fisheries examined the banding patterns on vertebrae from white sharks collected between 1963 and 2010 by the NOAA Fisheries Apex Predators Program. These samples came from white sharks caught on research cruises, taken by commercial and recreational fishing vessels, or landed at recreational fishing tournaments. Sampling took place between Prince Edward Island, Canada, and New Jersey.

The distribution of white sharks in the western North Atlantic is well documented, although the species is considered rare and much of what we know about it comes from distribution records, a handful of observations, and dead specimens.

This study adds to other recent publications about white sharks. For example, a 2014 study used records compiled over 200 years, from 1800 to 2010, to look at the seasonal distribution and historic trends in abundance of white sharks in the western North Atlantic Ocean.

Increased numbers of white sharks off Cape Cod in recent years have provided Skomal and others with opportunities for satellite tagging, another way information is being gathered on shark movements. However, scientists still know little about the natural history of this species, including its reproductive biology and feeding ecology.

Sharks are slow-growing, long-lived animals with low reproduction rates. They are fished commercially throughout the world. Wise conservation requires life history information, including age and growth data, for sustainable management. While vertebral band-pair counts can provide age estimates for many species of sharks, it is critically important to validate how often the band pairs are formed in order to obtain accurate age estimates.

The shark vertebral samples for this study were provided by Natanson from the Apex Predators Program, which maintains one of the largest collections of North Atlantic white shark vertebrae. The Apex Predators Program, located at the NEFSC's Narragansett Laboratory in Rhode Island, collects basic demographic information about sharks and their life histories by conducting research on their distribution and migration patterns, age and growth, reproductive biology, and feeding ecology.

With lifespan estimates of 70 years and more, white sharks may be among the longest-lived fishes. Sharks that mature late, have long life spans and produce small litters have the lowest population growth rates and the longest generation times. Increased age at maturity would make white sharks more sensitive to fishing pressure than previously thought, given the longer time needed to rebuild white shark populations.