NOAA Commemorates The 100th Birthday Of Rms Titanic; Shipwreck 'A Powerful Symbol And An Icon'

Research: Up to 10 Years for Seafloor to Recover from Bottom Trawling; 'No good habitat, hardly any fish' 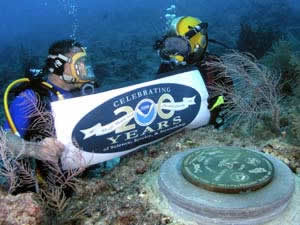 WASHINGTON, D.C. -- Two federal science agencies team up to explore "inner space." NOAA and NASA joined forces underwater to dedicate a survey marker on the ocean's seafloor and to help train astronauts for missions in outer space. Unveiled in an underwater dedication ceremony, the marker will be used to geo-reference coral surveys conducted by scientists striving to understand the complex mechanisms of the reef ecosystem and by astronauts training for survey missions on other planets.

The survey marker is the nation's second permanent marker on the seafloor. It is also the most recent addition to the markers that have been laid in 200 years of surveying the planet by NOAA or its predecessor agencies. NOAA traces its foundation in surveying to America's first physical science agency when President Thomas Jefferson established the Survey of the Coast in 1807.

Survey markers are permanent emplacements that mark key reference points on the Earth's surface. This newest marker was presented to NOAA by NASA, and was jointly unveiled by Deputy Assistant Secretary of Commerce for Oceans and Atmosphere Tim Keeney, and NASA Astronaut Heidemarie Stephanyshyn-Piper at NOAA's Aquarius Reef Base.

The site of the marker is near Aquarius, the planet's only underwater research laboratory. The long-term installation is 65 feet deep, nine miles off Key Largo in the NOAA Florida Keys National Marine Sanctuary. For the ceremony, Keeney dived to NOAA's Aquarius site where NASA astronauts were training for missions in space. NASA has partnered with NOAA to conduct NASA Extreme Environment Mission Operations, or NEEMO, training and testing missions on the Aquarius since 2001. NASA conducts experiments and training at Aquarius, which is one of the planet's best analogs for operations in space.

"For 20 years now, NOAA 's Aquarius undersea laboratory has supported ocean science and research in many areas, especially on the deep coral reef ecosystem at Aquarius Reef Base," said Keeney during the marker ceremony. "Coral ecosystems provide an early warning for global and coastal ocean changes that we must understand if we are to be stewards of our ocean and its resources. Today, reefs need rescue, and the invaluable asset that Aquarius provides will make this reef an important observation post for measuring and understanding change."

"NASA astronauts who trained here at Aquarius Reef Base have already put that training to work in the International Space Station, and others are likely to do so on the moon and other planets," said Stephanyshyn-Piper. "Aquarius is a valuable national asset, and we thank NOAA for these training opportunities as we salute the agency and its predecessors for 200 years of science and service to the nation."

The Aquarius laboratory is a seafloor habitat where teams of up to six researchers live and work during missions. Aquarius is operated for NOAA by the University of North Carolina at Wilmington, and has hosted 87 missions for ocean scientists, astronauts and students, as well as many agency partners, oceanographic institutions, universities and research labs. NASA teams have conducted 12 space analog missions at Aquarius Reef Base.

In addition to the Aquarius habitat, Aquarius Reef Base includes a seafloor observing system that sends real-time data and video directly to the Web, a robotic vehicle that can be navigated remotely and several communications stations along the reef tract.

NOAA, an agency of the U.S. Commerce Department, is celebrating 200 years of science and service to the nation. From the establishment of the Survey of the Coast in 1807 by Thomas Jefferson to the formation of the Weather Bureau and the Commission of Fish and Fisheries in the 1870s, much of America's scientific heritage is rooted in NOAA. NOAA is dedicated to enhancing economic security and national safety through the prediction and research of weather and climate-related events and information service delivery for transportation, and by providing environmental stewardship of the nation's coastal and marine resources. Through the emerging Global Earth Observation System of Systems (GEOSS), NOAA is working with its federal partners, more than 60 countries and the European Commission to develop a global monitoring network that is as integrated as the planet it observes, predicts and protects.