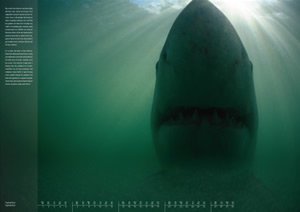 ILLINGEN, Germany, -- Underwater photographer Klaus Jost has been pursuing his fascination with great whites, tiger sharks and bull sharks many for years and follows these impressive animals up close in their natural habitat. His incentive, however, is not just to share his unique photographs with the public on his homepage homepage http://www.jostimages.com but also to contribute to the protection of these animals. "I would like to use these photographs of the great white to appeal to people and hope that awareness of the need to protect these endangered animals will grow", says Klaus Jost.

For many years, great whites have had to fear for their lives for no reason, and in the meantime are threatened with extinction. "Unfortunately, great whites have the image of killer fish. Because people are afraid of being attacked by a shark, hardly anyone is interested in protecting these animals," says Klaus Jost. "But I am convinced that interest in protecting this species from extinction will grow if the public recognizes what fascinating and impressive animals great whites are," Klaus Jost continues.

The motifs for the calendar were selected from a large number of photographs. The Great White Calendar will also be presented in the calendar exhibition at the 2009 Frankfurt Book Fair in the foyer of hall 4.1. It contains high quality photos of the Great White, which is on the red list of threatened animal species at risk of extinction.

Klaus Jost has been photographing and documenting the life of sharks in their natural surroundings for more than ten years. On his homepage http://www.jostimages.com he makes his photographs available to the general public. You will find impressive photos there that reflect his fascination with these animals threatened with extinction.

His narrative and photojournalistic stories have appeared worldwide in prestigious journals, magazines and newspapers such as in "National Geographic Germany" and "GEO" among others.