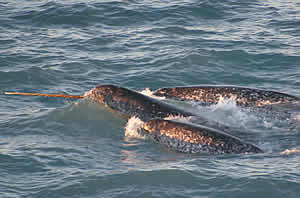 RESTON, Virginia -- In a research paper published online Saturday in the Journal of Geophysical Research Oceans, a publication of the American Geological Union (AGU), scientists reported the southern Baffin Bay off West Greenland has continued warming since wintertime ocean temperatures were last effectively measured there in the early 2000s.

Temperatures in the study were collected by narwhals, medium-sized toothed Arctic whales, during NOAA-sponsored missions in 2006 and 2007. The animals were tagged with sensors that recorded ocean depths and temperatures during feeding dives from the surface pack ice to the seafloor, going as deep as 1,773 meters, or more than a mile.

Scientists have had limited opportunities to measure ocean temperatures in Baffin Bay during winter months because of dense ice and harsh conditions. Cost is also a factor â it requires millions of dollars to mount a conventional expedition using an ice-breaking vessel and other specialized equipment and people. As a result, for the past decade, researchers used climatology data consisting of long-term historical average observations rather than direct ocean temperature measurements for winter temperatures in the area.

The published study reported that highest winter ocean temperature measurements in 2006 and 2007 from both narwhals and additional sensors deployed using helicopters ranged between 4 and 4.6 degrees Celsius (39.2 and 40.3 degrees Fahrenheit). The study also found that temperatures were on average nearly a degree Celsius warmer than climatology data. Whale-collected temperatures also demonstrated the thickness of the winter surface isothermal layer, a layer of constant temperature, to be 50 to 80 meters less than that reported in the climatology data.

"Narwhals proved to be highly efficient and cost-effective 'biological oceanographers,' providing wintertime data to fill gaps in our understanding of this important ocean area," said Kristin Laidre from the Polar Science Center in the University of Washington's Applied Physics Laboratory. "Their natural behavior makes them ideal for obtaining ocean temperatures during repetitive deep vertical dives. This mission was a 'proof-of-concept' that narwhal-obtained data can be used to make large-scale hydrographic surveys in Baffin Bay and to extend the coverage of a historical database into the poorly sampled winter season."

Greenland's coast is a gateway for fresh water from melting polar ice flowing south to the Labrador Shelf, ultimately reaching the North Atlantic Current. The Arctic flow's effect on the current is critical for understanding the impacts of a changing Arctic on the transference of heat globally from the equator to higher latitudes.

Laidre was lead scientist on the NOAA-sponsored missions and is lead author of the paper. "Continued warming will likely have pronounced effects on the species and ecosystem in Baffin Bay and may eventually affect sea ice coverage in the region, which in recent years has already retreated significantly," she said. "The timing of the break-up of spring sea ice is ecologically important for many marine species and is linked to primary production that forms the base of the food chain."

NOAA's Office of Ocean Exploration and Research funded the missions in 2006 and 2007 to tag and track narwhals as they made a fall migration from northwest Greenland to their wintering grounds in Baffin Bay. During that time and in an earlier mission, 14 adult narwhals were tagged with sensors to record date and time, ocean temperature and depth information. The data were automatically sent to a satellite when the narwhals surfaced for air between cracks in the sea ice. Tagging was carried out in accordance with the University of Washington's Animal Care Guidelines and a permit issued by the Government of Greenland. Each sensor tag provided up to seven months of data before falling off the animal.