Clue To Mystery Crustacean; 'The Adults Of These Larvae Must Be Parasites'

How Healthy is that Marsh? Biologists Count Parasites to Find Out 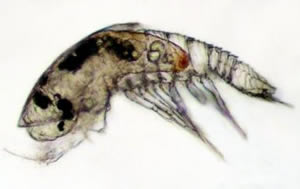 The mysterious crustacean Y larvae. No one has ever found an adult of these puzzling crustaceans. Credit: Hoeg et al, BMC Biology

LONDON, England -- First identified in 1899, y-larvae have been one of the greatest zoological mysteries for over a century. No one has ever found an adult of these puzzling crustaceans, despite the plethora of these larvae in plankton, leading generations of marine zoologists to wonder just what y- larvae grow up to be. A study published in BioMed Central’s open access journal, BMC Biology, reports the transformation of the larvae into a previously unseen, wholly un-crustacean-like, parasitic form.

Y larvae, or facetotectans, are found amongst marine plankton in oceans from the poles to the tropics. In coral reef areas they occur dizzying diversity, even though they are ubiquitous and similar to the larvae of barnacles, not one adult y-organism has been identified in over 100 years of considerable searching.

“Facetotectans are the only crustacean group with a taxonomy based solely on larval stages”, say Henrik Glenner and Jens Hoeg (University of Copenhagen) and colleagues from Japan “but the great species diversity indicates that the adults play an important ecological role.” Supported by the Carlsberg Foundation in Denmark and the Lake Biwa Museum in Japan, the study authors collected the study authors collected over 40 species of y larvae from one site at Sesoko Island near Okinawa, Japan, and exposed many of them to a crustacean moulting-hormone to encourage them to mature. The free-swimming y-larvae shed their articulated exoskeleton, and a simple, slug- like, pulsing mass of cells emerged.

The authors explain “The musculature and compound eyes that you might expect to see in adult crustaceans were in a state of degeneration, and from our observations of the live, and also preserved specimens, we conclude that the adults of these larvae must be parasites – but of what we do not know.”

The closest relatives of the facetotectans among the crustaceans are barnacles and another group, the Ascothoracida, both of which have similar larval stages and both of which have parasitic representatives. The stage induced in this study – the so called ypsigons – are not adults but another juvenile, post y-larva stage; the similarity between them and juveniles of the highly specialised parasitic rhizocephalan barnacles is, according to Glenner and colleagues, a remarkable example of convergent evolution.

The great diversity of Facetotecta and the finding that they are most likely parasitic as adults hints at a major ecological role that future studies, both in laboratories and in the field will try to uncover. These finding provide a tantalising glimpse of the solution to this 100-year-old riddle.