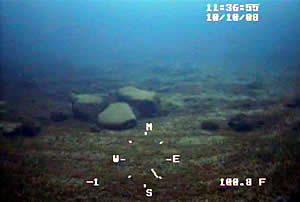 A potential stone hunting blind beneath Lake Huron that is approximately 3.5 m across. Photo courtesy of John O'Shea

ANN ARBOR, Michigan -- University of Michigan researchers recently announced the groundbreaking discovery of archaeological remains under the surface of Lake Huron — the first such find on the bottom of the Great Lakes.

John O’Shea, curator of Great Lakes Archaeology in the Museum of Anthropology and a professor in the Department of Anthropology, said the area — which spreads from Point Clark, Ontario to Presque Isle, Mich. — was dry land 10,000 years ago.

The researchers discovered lines of boulders and rocks, called drive lanes, on the lake floor that hunters used to attract caribou, which naturally follow lines.

Instead of building traps or stampeding caribou off cliffs, O’Shea said hunters made lines — some about 350 meters long — on land that is now below the lake’s surface.

“You can guide the animals into an area, then, where you step up an ambush and where you attack them,” he said.

The group also discovered piles of rocks, which they believe hunters crouched behind while waiting for herds.

Although many people have looked for sites like these, O’Shea said no one had ever found any under the Great Lakes.

O’Shea studied caribou hunting sites preserved in the arctic and used them as examples for finding similar ones underwater.

“We knew about these arctic examples, and so we kind of knew what the sights ought to look like, and that made it a lot easier then to find them,” he said.

A few years ago, a team including O’Shea, Guy Meadows, director of the Marine Hydrodynamics Laboratories and a professor in the departments of Naval Architecture and Marine Engineering and Atmospheric, Oceanic and Space Sciences and Robert Reynolds, professor of computer science at Wayne State University, began simulating caribou migrations and making a model of what the area below Lake Huron would have looked like as dry land.

Based on the reconstruction, the group chose three areas to research.

“(The vehicles) have a low light video camera, and you drive them using a joystick like a computer game,” O’Shea said.

Most recently, the team has employed archaeologists trained in scuba diving to investigate the site.

O’Shea said the scuba divers have identified large projections of rocks embedded with layers of chirt, which is a raw material people used to make tools.

“We’re thinking this may be a site where people would have quarried stone for their stone tools,” he said.

Rackham student Eric Rupley will be joining the team of scuba divers at the end of the summer. He said he’s excited to be able to participate in the cutting edge exploration.

“When we get down there we get into primary data that answers a series of questions of this time period and history of America that we have little information of,” Rupley said.

O’Shea said the discoveries made at the site provide researchers the opportunity to learn about the era in the Great Lakes region when early big game hunters first came to North America from Asia.

“It’s a time period in North American pre-history when really important things happened, and yet we don’t have any direct evidence of how they happened,” he said. “The sites under the lake offer a real potential to tell us about this time period that we can’t find out about any other way.”

O’Shea added that the animals and artifacts found at the few hunting sites in northern forests have been mostly destroyed by the acid in soil, while the water from the lake preserves organic material.

“All kinds of things that you wouldn’t be able to find on a terrestrial site you have the potential to find them in the lake,” he said. “It’s almost like a Pompeii, but with water instead of lava.”