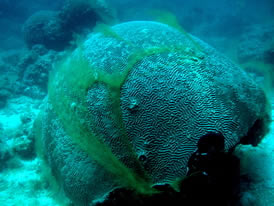 FT. PIERCE, Florida -- Since the 1980s, researchers have hypothesized that nutrient levels rather than temperature are the main factor controlling the latitudinal bounds of coral reefs, but the issue remains controversial. New results from an extensive survey of reefs in South Florida by a Harbor Branch Oceanographic Institution research team strongly support this hypothesis. The research suggests that, by supporting blooms of harmful seaweed, increasing nutrient pollution levels are reducing the areas where reef-building coral can survive, a result the team believes it is directly observing in Florida waters.

Temperature is a key determinant of the extent of shallow water reefs. Nonetheless, some waters that are warm enough for reef building corals do not have them. In Florida, for instance, reef-building coral s are for the most part not found north of Palm Beach County, about a third of the way up the coast. This boundary appears to have been similar throughout the state's geological history, yet corals thrive in Bermuda, well north of there where temperatures are cooler.

One idea is that, both historically and now, this Florida coral cut-off has been determined by nutrient levels. Corals' need for oligotrophic, or nutrient poor, water is well known, but the relative importance of temperature and nutrients in defining coral range can be difficult to discern. Lapointe believes, based on more than 20 years of research at reefs in Florida and the Caribbean, that levels of the nutrient phosphorus can be a key factor controlling growth of reef-building corals. The basic theory is that in the presence of sufficient nitrogen, which is typically more readily available, phosphorus is the limiting factor for macroalgae, or seaweed, growth, so high phosphorus levels can fuel the growth of seaweed that outcompetes corals, effectively smothering them.

As they do now, sediments rich in phosphorus historically dominated Florida's central and northern coastal areas above the Palm Beach County line. In the past, Lapointe says, naturally high levels of phosphorus would have set the northern coral boundary in Florida above which seaweed is dominant. Further south, the sediments are predominately carbonates, which react with phosphorus to significantly reduce levels of the nutrient in the water.

This geological nutrient balance has of course been substantially altered by Florida's ever-growing human population, which adds nutrients to coastal waters through a variety of forms of pollution. Secondarily treated sewage, for instance, issues from outfalls in South Florida by the hundreds of millions of gallons per day. Secondarily treated sewage also reaches the ocean by other means including hundreds of thousands of seeping septic systems and seepage from deep injection wells, where about 500 millions gallons of sewage is pumped per day. Extensive runoff, especially during rainy periods, also enters the ocean with high nutrient levels due to fertilizer use and other factors.

In 2004, Lapointe and colleagues began conducting biannual surveys of 88 South Florida reef sites between North Miami and Fort Pierce to track the spread of harmful algal blooms of both invasive and native seaweed species. The surveys, which the team conducted once during the dry season and once during the wet season in 2004 and 2005, included analyses of the extent of coral growth at each site as well as the collection of water and seaweed tissue sample s at 30 sites.

Supporting the theory that nutrient levels control the latitudinal boundaries of coral reefs, the team has found a clear increase from south to north in the concentration of phosphorus in forms that can be used by the seaweed and a corresponding expansion of fleshy seaweeds. They also found a complementary decrease in the number of species and extent of coral and reef fishes from south to north. These data were corroborated by analysis of tissue for the dominant seaweed species at each location, which, again, revealed less phosphorus at southern sites and more to the north.

These gradients were much more pronounced during the wet season compared to the dry season, suggesting a significant role for non-point source and other forms of nutrient-rich pollution in controlling nutrient dynamics at the reefs. Lapointe's group has also completed extensive analyses of the chemical signature of nitrogen stable isotopes in seaweed samples and determined that the algae are using mainly nitrogen from land-based sources, rather than from marine sources, further suggesting a tie to human activities.

It is difficult to determine what historical nutrient levels may have been for most reefs due to a lack of monitoring. However, Lapointe has been measuring nutrients at reefs in the Florida Keys since the 1980s and has documented steady increases throughout that period. This is the longest running nutrient time series for any reef in the world, he says.

"Natural and human factors play a role in dictating the dynamics of the waters where we see these harmful algal blooms," says Lapointe," but even 20 years ago the algae was not all over the reefs like it is now, so something has clearly changed over time."

Based on decades of previous research at Florida and other reefs, Lapointe believes that coral-smothering seaweed growth is dependent on a threshold level of phosphorus that in the past would likely only have been reached above the historic northern boundary for corals. Now, he says, that threshold has been surpassed at most if not all Florida reefs. In the more southern areas, the phosphorus-stripping influence of sediments has kept the phosphorus level from going so high that it supports the fleshy seaweeds, which require the most phosphorus. But levels there are still high enough to support the equally damaging spread of filamentous cyanobacteria (also known as blue-green algae), another form of harmful algal bloom. In time, if pollution inputs continue unabated, he says, his research suggests that the fleshy algae blooms will continue to move south. Sufficient nutrient levels, and associated seaweed growth, can effectively cause near or total loss of reef-building corals.

"We believe we've already seen regional extinctions of corals--in other words, a shrinking of the area where corals can now survive in Florida and elsewhere--as a result of nutrient inputs through various forms of pollution," says Lapointe. For instance, elkhorn corals have been almost completely eliminated from the Florida Keys.

Widespread precipitous coral declines are well documented at reefs around the world and indisputable. However, the debate about what factors are responsible for those declines continues to rage. Lapointe acknowledges that a variety of factors have likely played roles in this coral loss. However, he believes that nutrient pollution is one of the most serious if not the most serious current threat to corals in developed regions of the world.

"Certainly it appears that factors such as global warming leading to coral bleaching are having significant impacts, but I think it's a mistake to blame all the devastation we've witnessed in past decades on global factors. Local nutrient pollution problems can be addressed and if we do that, I think it's clear that corals will strongly benefit."