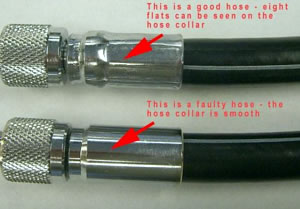 Silent Diving Systems is recalling about 820 scuba diving hoses because of a drowning hazard.

WASHINGTON, D.C. -- Silent Diving Systems is recalling about 820 scuba diving hoses because of a drowning hazard.

The diving hoses may have been made without crimps, which can allow gas to leak or water to enter into the re-breather unit of the scuba diving equipment, posing a drowning hazard to the user.

The crimped hoses are used to carry the air supply in the re-breathing diving system. The hoses were sold on three re-breathing models: Inspiration, Evolution and Evolution Plus. Hoses with a smooth (uncrimped) collar and with the model numbers listed below are included in the recall:

Hoses with eight flats on the hose collar have been crimped and are not included in the recall.

The hoses were sold by Silent Diving Systems nationwide from January 2007 through August 2008 for about $60. Re-breathers were sold for about $10,000. They were made in England.

For additional information, contact Silent Diving Systems toll-free at (877) 336-4077 between 9 a.m. and 5 p.m. ET Monday through Friday, or visit the firm's Web site at www.silentdiving.com.

The recall is being conducted in cooperation with the U.S. Consumer Product Safety Commission (Views expressed in this article do not necessarily reflect those of UnderwaterTimes.com, its staff or its advertisers.