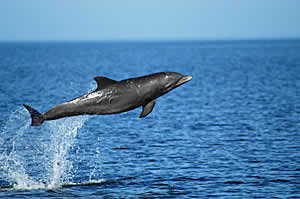 CHARLESTON, South Carolina -- Bottlenose dolphins* and beluga whales**, two marine species at or near the top of their respective food webs, accumulate more chemical pollutants in their bodies when they live and feed in waters near urbanized areas, according to scientists working at the Hollings Marine Laboratory (HML), a government-university collaboration in Charleston, S.C.

In papers recently published online by the journal Environmental Science & Technology, one research team looked at the levels of persistent organic pollutants (POPs) found in male dolphins along the U.S. East and Gulf of Mexico coasts and Bermuda, while the other group examined the levels of perfluorinated compounds (PFCs) in beluga whales at two Alaskan locations. Data gathered in both studies are expected to serve as baseline measurements for future research to define the health effects and impacts of these pollutants on the two species.

POPs are a large group of man-made chemicals that, as their name indicates, persist in the environment. They can spread globally through air and water, accumulate in the food chain, and may have carcinogenic, neurodevelopmental, immune or endrocrine effects on both wildlife and humans. To study POP concentrations in male bottlenose dolphins (Tursiops truncatus), researchers from the National Institute of Standards and Technology (NIST), the National Oceanic and Atmospheric Administration (NOAA), the Duke University Marine Laboratory, Florida State University and the Chicago Zoological Society teamed up to collect and examine blubber biopsy samples from 2000 to 2007 at eight locations along the U.S. East coast (from New Jersey to Eastern Florida), five sites in the eastern Gulf of Mexico and off Bermuda. The researchers analyzed the dolphin blubber for POPs that were once used as insecticides (such as DDT), insulating fluids (polychlorinated biphenyls, or PCBs), flame retardants (polybrominated diphenyl ethers, or PBDEs) and a fungicide (hexachlorobenzene, or HCB).

Overall, PCBs were the pollutants found in the highest concentrations across the 14 sampling locations, followed by DDT, other pesticides and PBDEs, and HCB. Levels for POPs were statistically higher in dolphins living and feeding in waters near more urban and industrialized areas. The exceptions were the PCB levels recorded in dolphins living in waters near Brunswick, Ga., contaminated from a former factory that is now an Environmental Protection Agency "Superfund" cleanup site. These PCB levels were the highest ever observed in a group of living marine mammals.

In the second study, a NIST team analyzed the levels of 12 PFCs in livers harvested from 68 beluga whales (Delphinapterus leucas) that had lived and fed in two Alaskan locations: Cook Inlet in the urban southern part of the state and the Chukchi Sea in the remote northern part. The samples were collected from 1989 to 2006 by Native Alaskans during subsistence hunts and stored at NIST's National Marine Mammal Tissue Bank (NMMTB). This was the first study to look at the concentration of PFCs in belugas from Alaska.

PFCs have been used as nonstick coatings and additives in a wide variety of goods including cookware, furniture fabrics, carpets, food packaging, fire-fighting foams and cosmetics. They are very stable, persist for a long time in the environment and are known to be toxic to the liver, reproductive organs and immune systems of laboratory mammals.

PFCs were detected in all of the beluga livers, with two compoundsâperfluorooctane sulfonate (PFOS) and perfluorooctane sulfonamide (PFOSA)âfound in more than half the samples. All but one of the PFC concentrations measured were significantly higher in the Cook Inlet belugas, an expected result given the nearby urban, industrialized area. The exception was PFOSA, where levels were higher amongst the Chukchi Sea whales. The researchers are unsure if this is the result of the pollutant being carried into the remote region by ocean currents, atmospheric transport or a combination of both. They also found that PFC concentrations in belugas increased significantly over the seven-year study period and were mostly higher in males.