Scientists: Zoning The Ocean May Help Endangered Whales To Recover; An Idea 'Rife With Human Conflict' 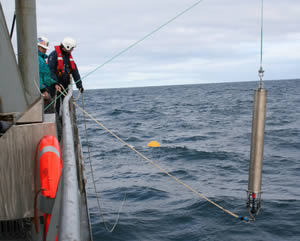 Scientists including Matt Fowler, who works for both Oregon State University and NOAA, deploy a hydrophone in the North Atlantic. photo Dave Mellinger

NEWPORT, Oregon -- Using a system of underwater hydrophones that can record sounds from hundreds of miles away, a team of scientists from Oregon State University and the National Oceanic and Atmospheric Administration has documented the presence of endangered North Atlantic right whales in an area they were thought to be extinct.

The discovery is particularly important, researchers say, because it is in an area that may be opened to shipping if the melting of polar ice continues, as expected.

Results of the study were presented this week at a meeting of the Acoustical Society of America in Portland, Ore.

The scientists are unsure of exactly how many whales were in the region, which is off the southern tip of Greenland and site of an important 19th-century whaling area called Cape Farewell Ground. But they recorded more than 2,000 right whale vocalizations in the region from July through December of 2007.

"The technology has enabled us to identify an important unstudied habitat for endangered right whales and raises the possibility that – contrary to general belief – a remnant of a central or eastern Atlantic stock of right whales still exists and might be viable," said David Mellinger, an assistant professor at OSU's Hatfield Marine Science Center in Newport and chief scientist of the project.

"We don't know how many right whales there were in the area," Mellinger added. "They aren't individually distinctive in their vocalizations. But we did hear right whales at three widely space sites on the same day, so the absolute minimum is three. Even that number is significant because the entire population is estimated to be only 300 to 400 whales."

Only two right whales have been sighted in the last 50 years at Cape Farewell Ground, where they had been hunted to near extinction prior to the adoption of protective measures.

Funded by NOAA's Office of Ocean Exploration and Research, the project began in 2007 with the deployment of five hydrophones off the coast of Greenland. These instruments, built by Haru Matsumoto at OSU, were configured to continuously record ambient sounds below 1,000 Hz – a range that includes calls of the right whale – over a large region of the North Atlantic.

Right whales produce a variety of sounds, Mellinger said, and through careful analysis these sounds can be distinguished from other whales. The scientists used recordings of North Atlantic and North Pacific right whales to identify the species' distinct sounds, including vocalizations known as "up" calls. Beginning in July of 2007, the scientists recorded a total of 2,012 calls in the North Atlantic off Greenland.

The pattern of recorded calls suggests that the whales moved from the southwest portion of the region in a northeasterly direction in late July, and then returned in September – putting them directly where proposed future shipping lanes would be likely.

"Newly available shipping lanes through the Northwest Passage would greatly shorten the trip between Europe and East Asia, but would likely cross the migratory route of any right whales that occupy the region," said Phillip Clapham, a right whale expert with NOAA's National Marine Mammal Laboratory, who participated in the study. "It's vital that we know about right whales in this area in order to effectively avoid ship strikes on what could be a quite fragile population."

In addition to Mellinger and Clapham, scientists involved in the project include Sharon Nieukirk, Karolin Klinck, Holger Klinck and Bob Dziak of the Cooperative Institute for Marine Resources Studies – a joint venture between OSU and NOAA; and BryndÃ­s BrandsdÃ³ttir, of the University of Iceland.

This is the third time that Mellinger's team has used hydrophones to locate endangered right whales. In the January 2004 issue of the journal Marine Mammal Science, Mellinger and his colleagues outlined how they used autonomous hydrophones to identify right whales in the Gulf of Alaska, where only one confirmed sighting had taken place in 26 years. And they identified the seasonal occurrence of right whales off Nova Scotia in a 2007 issue of the journal.

OSU scientists first began hearing whale sounds several years ago on a U.S. Navy hydrophone network. The hydrophone system – called the Sound Surveillance System, or SOSUS – was used by the Navy during the Cold War to monitor submarine activity in the northern Pacific Ocean. As the Cold War ebbed, these and other military assets were offered to civilian researchers performing environmental studies.

An Oregon State researcher, Christopher Fox, first received permission from the Navy to use the hydrophones at his laboratory at OSU's Hatfield Marine Science Center to listen for undersea earthquakes – a program now directed by Bob Dziak.

While listening for earthquakes, the OSU researchers begin picking up sounds of ships, marine landslides – and whales. Matsumoto, an engineer at the center, then developed autonomous hydrophones that can be deployed independently. Hydrophones since have become an important tool for marine ecologists, as well as geologists.