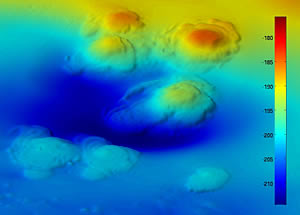 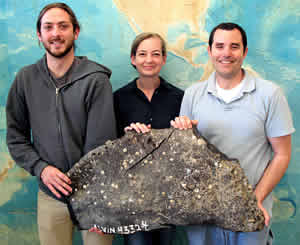 WOODS HOLE, Massachusetts -- They paved paradise and, it turns out, actually did put up a parking lot. A big one. Some 700 feet deep in the waters off California's jewel of a coastal resort, Santa Barbara, sits a group of football-field-sized asphalt domes unlike any other underwater features known to exist.

About 35,000 years ago, a series of apparent undersea volcanoes deposited massive flows of petroleum 10 miles offshore. The deposits hardened into domes that were discovered recently by scientists from the Woods Hole Oceanographic Institution (WHOI) and UC Santa Barbara (UCSB).

Their reportâco-authored with researchers from UC Davis, the University of Sydney and the University of Rhode Islandâappears online today (April 25) in the Journal Nature Geoscience. The work was funded by the National Science Foundation, U.S. Department of Energy and the Seaver Institute.

"It was an amazing experience, driving alongâ¦and all of a sudden, this mountain is staring you in the face," said Christopher M. Reddy, director of WHOI's Coastal Ocean Institute and one of the study's senior authors, as he described the discovery of the domes using the deep submersible vehicle Alvin. Moreover, the dome was teeming with undersea life. "It was essentially an oasis," he said, "almost like an artificial reef."

What really piqued the interest of Reddyâa marine geochemist who studies oil spillsâwas the chemical composition of the dome: "very unusual asphalt material," he said. "There aren't that many opportunities to study oil that's been sitting around on the bottom of the ocean for 35,000 years."

Reddy's unique chance came courtesy of UCSB earth scientist and lead author David L. Valentine, who first came upon the largest of the structuresânamed Il Duomoâand brought back a chunk of the brittle, black material in 2007 from an initial dive in Alvin, which WHOI operates for the US Navy. Valentine and Reddy were on a cruise aboard the WHOI-operated research vessel Atlantis, following up on undersea mapping survey by the Monterey Bay Aquarium Research Institute (MBARI) and the work of UCSB earth scientist Ed Keller.

"The largest [dome] is about the size of two football fields, side by side and as tall as a six-story building," Valentine said. Alvin's robotic arm snapped off a piece of the unusual formation, secured it in a basket and delivered it to Reddy aboard Atlantis.

"I was sleeping," Reddy chuckled. "Somebody woke me up and wanted me to look at the rocks and test them."

It turned out to be quite an awakening. "I was amazed at how easy it was to break," Reddy recalls, "which confirmed it wasn't solid rock" and lent credence to Keller's theory that these structures might be made of asphalt.

Without access to the sophisticated equipment in his Woods Hole lab, Reddy employed a "25-cent glass tube, the back of a Bic pen and a little nail polish remover" to analyze the crusty substance. He used the crude tools like a mortar and pestle to grind the rock, "and literally within several minutes, it became a thick oil."

"This immediately said to me that this was asphalt," Reddy said. "And I remember turning to Dave [Valentine] and saying, 'We've got to back. Please take me back there'" to the dome.

After making some schedule changes, Valentine cleared the way for him and Reddy to take Alvin back to several sites in 2007. This work also set the stage for a follow-up study in September 2009, when the investigators returned to the domes with Alvin and the Autonomous Undersea Vehicle (AUV) Sentry to study the unique structures. They were joined by, among others, WHOI collaborators Dana Yoerger, Richard Camilli and Robert K. Nelson and Oscar Pizarro, now at the University of Sydney.

"With that combination, we were able to go in and do very detailed mapping of the site and very detailed sampling at the seafloor," Valentine said. Using mass spectrometers and radiocarbon dating in their respective laboratories, the scientists were able to confirm the nature and age of the domes.

What it looked like was "incredibly weathered," said Reddy. "That means nature had taken away a lot of compounds. These mounds of black material were the last remnants of oil that exploded up from below. To see nature doing this on its own was an unbelievable finding."

A few asphalt-like undersea structures have been reported, says Valentine, "but not anything exactly like theseâ¦no large structures like we see here." He estimates that the dome structures contain about 100,000 tons of residual asphalt and compares them to an underwater version of the La Brea Tar Pits in Los Angeles, complete with the fossils of ancient animals.

The researchers are not sure exactly why sea life has taken up residence around the asphalt domes, but one possibility is that because the oil has become benign over the years that some creatures are able to actually feed off it and get energy from it. They may also be "thriving" on tiny holes in the dome areas that release minute amounts of methane gas, Reddy says.

The scientists plan to continue studying the domed structures. "We have some very fundamental questions that remain," Valentine says. "It would be nice to know what is going on deep down under these things.

"One future direction is to try and actually drill into them," he says. "We also need to turn it over to some geologists to figure out where this oil is really coming from. More fundamentally, we're going to look at the actual degradation of the oil by microorganisms and maybe even see what organisms are trapped in thisâ¦very much like the La Brea Tar Pits."

From a chemical point of view, Reddy says he will continue to probe the question of exactly which of the chemicals that make up the domes "stayed around" all these years.

"Instead of this taking place at a refinery, nature used a variety of its own tools," he said, to manufacture the asphalt substance. With some heating and a few chemical tweaks, he added, this is essentially the same material that paves highways and parking lots. After all, it is California.