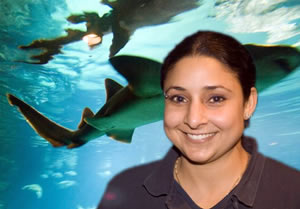 Kavita Khemlani taught sharks to feed only after they touched a particular spot in the tank..

ROTTERDAM, The Netherlands -- Biology student Kavita Khemlani is a dog trainer in her spare time. For her studies, she works with animals that she can’t pet if they do their tricks right. Amazingly, she managed to teach the bullsharks and blacknose sharks at the Rotterdam Zoo to improve their feeding behaviour with techniques used originally on dogs and other animals.

“We started training the sharks after one of them was spotted grabbing a fish from the mouth of a turtle in the same tank”, she says. “Everyone realized it was a potentially dangerous situation.” Time for table manners – the sharks were taught to get their food at a distinct spot in the aquarium, and only if they bump their noses into a marked sign.

“In the beginning we rewarded the sharks with food as soon as they swam into the right half of the tank. Then we taught them to get their food at one specific location. Now they’ve learned to bump their noses into a target – they have to choose between a sign with a triangle, and one with a square. They only get food if they touch the square.” The ability to distinguish between such visual stimuli had not convincingly been reported in sharks before.

For many visitors to the zoo, the experiments are a real eye-opener. They learn that sharks are not just mindless meat-seeking missiles. Rotterdam Zoo hopes to progress further with the experiments, so that each individual shark gets its own sign. A shark that is sick could get its medicines that way, without the keepers having to remove it from the tank first.