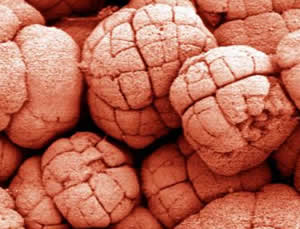 The photo (field of view about 0.15 millimeter in width) is of an exceptionally preserved eukaryotic fossil. Credit: Shuhai Xiao

BLACKSBURG, Virginia -- The rise of oxygen and the oxidation of deep oceans between 635 and 551 million years ago may have had an impact on the increase and spread of the earliest complex life, including animals, according to a study reported in the Proceedings of the National Academy of Sciences online Early Edition during the week of February 25 – 29.

Today, we take oxygen for granted. But the atmosphere had almost no oxygen until 2.5 billion years ago, and it was not until about 600 million years ago when the atmospheric oxygen level rose to a fraction of modern levels. For a long time, geologists and evolutionary biologists have speculated that the rise of the breathing gas and subsequent oxygenation of the deep oceans are intimately tied to the evolution of modern biological systems.

To test the interaction between biological evolution and environmental change, an international team of scientists from Virginia Tech, the University of Maryland, University of Nevada at Las Vegas, and Chinese Academy of Sciences, examined changes in the geochemistry and fossil distribution of 635- to 551-million-year old sediments preserved in the Doushantuo Formation in the Yangtze Gorges area of South China.

Millions of years ago, the Yangtze Gorges area was an ancient sea, said Kathleen A. McFadden, a Ph.D. candidate in geobiology at Virginia Tech and the lead author of the PNAS article.

To determine when there was enough oxygen to support animal life in the ocean, the researchers asked, “What kind of geochemical evidence would there be in the rock record?” said Shuhai Xiao, associate professor of geosciences at Virginia Tech.

Scientists hypothesized that there was a lot of dissolved organic carbon in the ocean when oxygen levels were low. If oxygen levels rose, some of this organic carbon would be oxidized into inorganic forms, some of which can be preserved as calcium carbonate in the rock record. “We measured the carbon isotope signatures of organic and inorganic carbon in the ancient rocks to infer oxidation events,” said co-author Ganqing Jiang, assistant professor of geology at the University of Nevada at Las Vegas.

The layers of sediment exposed by the Three Gorges Dam represent millions of years of deposits. “We went through road cuts, bed by bed, measuring and describing the exposed rock, then took small rock samples every few feet or so,,” said McFadden. She collected about 200 samples; hundreds of samples were taken to three labs.

The researchers cleaned and crushed the small samples to powder, which they reacted with acid to release carbon dioxide from carbonate minerals, and then burned the residue to get carbon dioxide from organic matter. “The CO2 that is released was measured with mass spectrometers to gives us the isotopic signature of the carbonate and organic carbon that was present in the rock,” said McFadden.

“The relative abundances of the carbon-12 and carbon-13 isotopes, which are stable and do not decay with time, provide a snapshot of the environmental processes taking place in the ocean at the different times recorded in the layers of rock,” McFadden said.

The stratigraphic pattern of carbon isotope abundances suggested to these researchers that the ocean, which largely lacked oxygen before animals arrived on the scene, was aerated by two discrete pulses of oxygen.

“The first pulse apparently had little impact on a large organic carbon reservoir in the deep ocean, but did spark changes in microscopic life forms,” McFadden said. “The second event, which occurred around 550 million years ago, however, resulted in the reduction of the organic carbon reservoir, indicating that the ocean became fully oxidizing just before the evolution and diversification of many of Earth’s earliest animals,” she said.

“The Doushantuo Formation has a wonderful fossil record,” McFadden said. “It allows us to look at major fossil groups, when they appear and when they disappear, and to see a relationship between oxidation events and biological groups.”

“This study supports the growing view that life and environment co-evolved through this tumultuous period of Earth history,” said geochemist Alan J. Kaufman, a co-author of the study from the University of Maryland.

The researchers analyzed the fossils in the Doushantuo Formation, from microscopic life forms of 635 million years ago to large algae around 551 million years ago. Looking at data from four locations with very similar isotopic records, they report that the first oxygen spike resulted in a rise in microscopic organisms, some of which are thought to be the earliest animal embryos. The second spike in oxygen coincides with a dramatic increase in species of large complex algae.

“Both oxidation events appear to coincide with increased diversity of fossils assemblages in the Doushantuo basin, with the number of species nearly doubling,” McFadden said.

Following this second oxidation event, between 550 and 542 million years ago, there was a worldwide increase of Ediacara organisms, complex macroscopic life forms, an event recently dubbed as the Avalon Explosion (www.vtnews.vt.edu/story.php?relyear=2008&itemno=1). “This was when we see the first burrowing animals and biomineralizing animals in the fossil record,” McFadden said. Biomineralizing animals are the first animals to form external skeletons, or shells.

The triggers for the oxidation events remain elusive, however. “These events recorded in the ocean were probably related to oxygen in the atmosphere reacting with sediments on land,” McFadden said. “Weathering of rocks and soils on the continents would result in the release of certain dissolved ions, such as sulfate, into rivers. These would then be transported to the sea where they might be used by bacteria to oxidize the organic carbon pool in the deep oceans,” she said..