Canada's Marineland: Who Is Philip Demers aka 'The Walrus Whisper'? 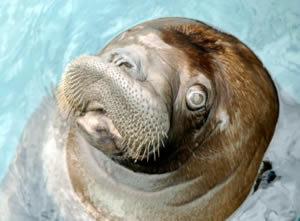 Akituusaq is a rarity. Of just 10 walrus calves to be born at an aquarium, he is one of only six to survive past the first year. His birth also was the first in history to be filmed.

The 1-year-old's birthday was celebrated at 11 a.m. Thursday at the New York Aquarium on West Eighth Street and Surf Avenue.

It was the first birthday of a baby walrus in the New York Aquarium's 112-year history.

New Yorkers can celebrate Akituusaq's birthday on Saturday and Sunday with music and games, face painting, storytelling and walrus workshops from noon to 4 p.m. at Explore the Shore Plaza.

Visitors also will have an opportunity to sign a giant walrus birthday card and participate in a contest to guess Akituusaq's weight.