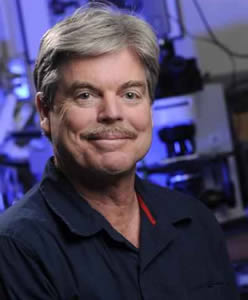 Jim McClintock, Ph.D., is a leading polar marine biologist who is researching the impacts of ocean acidification. Credit: UAB/Steve Wood

BIRMINGHAM, Alabama -- The increasing acidity of the world's oceans – and that acidity's growing threat to marine species – are definitive proof that the atmospheric carbon dioxide that is causing climate change is also negatively affecting the marine environment, says world-renowned Antarctic marine biologist Jim McClintock, Ph.D., professor in the University of Alabama at Birmingham (UAB) Department of Biology.

"The oceans are a sink for the carbon dioxide that is released into the atmosphere," says McClintock, who has spent more than two decades researching the marine species off the coast of Antarctica. Carbon dioxide is absorbed by oceans, and through a chemical process hydrogen ions are released to make seawater more acidic.

"Existing data points to consistently increasing oceanic acidity, and that is a direct result of increasing carbon dioxide levels in the atmosphere; it is incontrovertible," McClintock says. "The ramifications for many of the organisms that call the water home are profound."

A substance's level of acidity is measured by its pH value; the lower the pH value, the more acidic is the substance. McClintock says data collected since the pre-industrial age indicates the mean surface pH of the oceans has declined from 8.2 to 8.1 units with another 0.4 unit decline possible by century's end. A single whole pH unit drop would make ocean waters 10 times more acidic, which could rob many marine organisms of their ability to produce protective shells – and tip the balance of marine food chains.

"There is no existing data that I am aware of that can be used to debate the trend of increasing ocean acidification," he says.

McClintock and three co-authors collected and reviewed the most recent data on ocean acidification at high latitudes for an article in the December 2009 issue of Oceanography magazine, a special issue that focuses on ocean acidification worldwide. McClintock also recently published research that revealed barnacles grown under acidified seawater conditions produce weaker adult shells.

Antarctica as the Ground Zero for Climate Change

McClintock says the delicate balance of life in the waters that surround the frozen continent of Antarctica is especially susceptible to the effects of acidification. The impact on the marine life in that region will serve as a bellwether for global climate-change effects, he says.

"The Southern Ocean is a major global sink for carbon dioxide. Moreover, there are a number of unique factors that threaten to reduce the availability of abundant minerals dissolved in polar seawater that are used by marine invertebrates to make their protective shells," McClintock says.

"In addition, the increased acidity of the seawater itself can literally begin to eat away at the outer surfaces of shells of existing clams, snails and other calcified organisms, which could cause species to die outright or become vulnerable to new predators."

One study McClintock recently conducted with a team of UAB researchers revealed that the shells of post-mortem Antarctic marine invertebrates evidenced erosion and significant loss of mass within only five weeks under simulated acidic conditions.

McClintock says acidification also could exert a toll on the world's fisheries, including mollusks and crustaceans. He adds that the potential loss of such marine populations could greatly alter the oceans' long-standing food chains and produce negative ripple effects on human industries or food supplies over time.

"So many fundamental biological processes can be influenced by ocean acidification, and the change in the oceans' makeup in regions such as Antarctica are projected to occur over a time period measured in decades," McClintock says.

"Evolution simply may be unable to keep up, because it typically takes marine organisms longer periods, hundreds or even thousands of years to naturally adapt," he says. "But ocean acidification is simply happening too quickly for many species to survive unless we reverse the trend of increasing anthropogenically generated carbon dioxide that is in large part driving climate change."