Scientist: Coral's Addiction To 'Junk Food' Keyed By One Of Nature's Most Delicate And Complex Partnerships 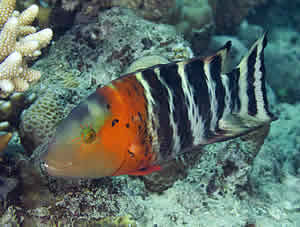 TOWNSVILLE, Queensland -- Lessons from tens of millions of years ago are pointing to new ways to save and protect today's coral reefs and their myriad of beautiful and many-hued fishes at a time of huge change in the Earth's systems.

The complex relationship we see today between fishes and corals developed relatively recently in geological terms â and is a major factor in shielding reef species from extinction, says Professor David Bellwood of the ARC Centre of Excellence for Coral Reef Studies and James Cook University.

"Our latest research provides strong evidence for a view that today's coral hotspots are both a refuge for old species and a cradle for new ones," said Peter Cowman, lead author of a recent report. "This is the first real inkling we've had that just protecting a large area of reef may not be enough â you have to protect the right sorts of reef."

Early coral reefs, 300-400 million years ago were much simpler affairs than today's colourful and complex systems, Prof. Bellwood says. The fish were not specialized to live on or among corals â either lacking jaws altogether, or else feeding on detritus on the seabed or preying on one another.

"By 200 million years ago we are starting to see fish with jaws capable of feeding on corals, but the real explosion in reef diversity doesn't occur till about 50 million years ago when we see fishes very like today's specialist coral feeders emerging."

It is the ever-increasing complexity of this relationship between corals and fishes over the last 20 or 30 million years that produces the wondrous diversity of today's reefs, he says. Each has become more critical to the survival of the other as their lives have become more interwoven.

"When people think of coral reefs, they usually think of the beautiful branching corals like staghorn (Acropora) â well the evidence is now fairly clear that Acropora needs certain fish for it to flourish. But, it now appears that this may be a reciprocal relationship with Acropora being important for the evolution and survival of fishes on coral reefs. "

Unfortunately Acropora corals are highly vulnerable to external impacts like Crown-of-Thorns starfish, coral bleaching, climate change and ocean acidification. Their demise will have far reaching effects on the fishes which interact with them, such as damsels, butterfly fish, cardinals and wrasses.

"The study of the past tells us that reefs are all about relationships and, like a family, for them to survive those relationships need to remain strong," Peter Cowman said.

"In coming years it is probable reefs will be subject to relentless presses that may cause them to change fundamentally. Those with the best long-term prospects of survival will be the ones where the relationships between fish and corals are healthiest.

Both fish and corals managed somehow to survive the five great mass extinction events of the past, though they sustained massive loss of species. Over time these have left us with a world focus of reef biodiversity centered on the Coral Triangle region to Australia's north, which in turn helps recharge Australian coral reefs, especially in the west.

"The Coral Triangle is currently subject to intensifying human and ecosystem pressure. The latest work by Peter Cowman and Prof Bellwood suggests it is both a cradle for new species and a refuge in troubled times â so it is vital that it remain intact.

"This isn't about saving individual species or particular reefs, it's about maintaining the basic relationships which ensure the survival of the whole," says Prof Bellwood.

"We've had a 'heads up' from the past that is giving us fresh insights into what is most important on reefs and why we must protect our precious reefs and fishes into the future."