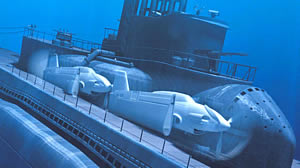 A computer-generated image depicts the hangar of the I-14, one of the Japanese submarines located off Oahu. Credit Wild Life Productions

WASHINGTON, D.C. -- Two World War II Japanese submarines, designed with revolutionary technology to attack the U.S. mainland, have been discovered off the Hawaiian coast of Oahu. They are the I-14, which carried two aircraft while submerged; and the I-201, one of the fastest attack subs of WWII. The submarines are widely believed to have been intentionally sunk by the U.S. Navy at the end of the war to keep the technology from the Soviet Union.

The announcement of the discovery was made by the National Oceanic and Atmospheric Administration's (NOAA's) Undersea Research Lab at the University of Hawai'i at Manoa and by National Geographic Channel (NGC), which documented and partly funded the search mission for the upcoming special Hunt for the Samurai Subs, premiering Tuesday, November 17, at 9:00 p.m. ET/PT during the network's second annual Expedition Week.

The subs, intended as part of a top-secret plan by the Imperial Japanese Navy to attack the U.S. mainland, including New York City and Washington, D.C., were last seen in 1946 when the American Navy intentionally sunk them, reportedly to keep their advanced technology out of Soviet hands during the opening chapters of the Cold War.

"This is one of the more significant marine heritage findings in recent years," said Dr. Hans Van Tilburg, of NOAA's Office of National Marine Sanctuaries, which assists the Hawai'i Undersea Research Lab (HURL) and other regional research centers in their maritime archaeology surveys. "These submarines are 60-year-old time capsules offering firsthand insight into a military technology that was far ahead of its time -- so much so that if introduced earlier and in greater numbers, the submarines had the potential to turn the tide of war."

Since 1992, a team led by Terry Kerby, HURL operations director and chief pilot, has used the manned submersibles Pisces IV and Pisces V during test and trial dives to hunt for the submarines and other lost maritime heritage artifacts. In March 2005, the I-401, which carried three aircraft, was the first submarine located. Its discovery was publicly announced that same year. The I-400, sister ship to the I-401, remains undiscovered. The I-14 and the I-201 attack submarines ? which were both capable of staying submerged for up to a month ? were discovered in February 2009, with the official public announcement today.

Rare 16mm film footage, taken by the U.S. Navy in 1946 of the I-14 submarine as she was sunk, revealed a target area the team had never explored before. At a depth of almost 3,000 feet, the two newly discovered subs were identified by signs of a catapult launch ramp on the forward deck leading to the bow and the ship's numbers painted on the conning tower.

Japan's aircraft-carrying submarines held up to three folding-wing float plane bombers that could be launched by catapult just minutes after surfacing. Each aircraft could carry a powerful 1,800-pound bomb to attack the U.S. mainland. Though the targets later shifted, none of the missions were carried out.

Longer than a football field at 400 feet, the I-400 "Sen-Toku" class were the largest submarines ever built until the introduction of nuclear-powered submarines in the 1950s. With a range of 37,500 miles, they were able to go one and a half times around the globe without refueling, a capability that, to this day, has never been matched by any other diesel-electric submarine.

At the end of WWII, the U.S. Navy captured the subs and had exclusive access to their technology. When the Soviet Union demanded access in 1946 under the terms of the treaty that ended the war, the U.S. Navy sunk the subs off the coast of Oahu and claimed to have no information on their precise location.

The wreckage of the submarines will be seen for the first time in high definition in Hunt for the Samurai Subs. The film includes the WWII-era 16mm film footage shot by Charles Alger, a retired U.S. Navy chief in charge of the I-14. In an interview, Alger says of the sinking, "It was very sickening, the moment of the explosion. But like any good sailor, a job is done, and we've done it ... I never ever thought that it would ever be seen by a human being again." Retired U.S. Navy commander Buck Catlin explains the rationale behind it: "It was decided to take those submarines out to sea off of Pearl Harbor, one at a time, and fire torpedoes and sink them. One of the main objects was to keep them away from the Russians, so we kept it quiet. And that's one of the reasons why the Submarine Force never advertised what we're talking about today."

Other key interviews in the film include Atsushi Asamura, a kamikaze pilot assigned to the I-401 aircraft-carrying submarine; Van Tilburg, who also surveyed the underwater wreckage; and Dik Daso, curator of modern military aircraft at the Smithsonian's National Air and Space Museum, which houses the sole surviving Aichi M6A1 Seiran plane built for the Japanese subs.