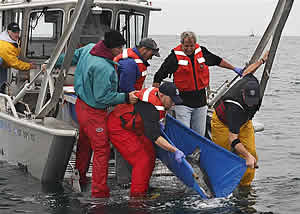 A young female white shark placed on exhibit at the Monterey Bay Aquarium in late August was returned to the wild today (Wednesday, November 4), marking the fifth time the aquarium has successfully exhibited and released a great white shark.

Aquarium staff released the shark in offshore waters near the southern tip of Monterey Bay shortly after sunrise.

Prior to her release, the shark was fitted with two electronic tracking tags. One will deliver real-time data on her location to researchers; a second will collect and store information documenting her travels, the depths she dives to and the water temperatures she favors for about six months, before it pops free and delivers those data to scientists via satellite.

The timing of her release was prompted by several recent observations of aggressive behavior toward other sharks in the million-gallon Outer Bay exhibit.

"I've always said that these animals will tell us when it's time to put them back to the ocean. Now was clearly the time," said Randy Hamilton, vice president of husbandry for the aquarium. "Her health is excellent, and we learned a lot while she was with us. Based on past experience, we have every expectation that she'll do well after release."

Data from tracking tags on four previous sharks kept at the aquarium for up to six-and-a-half months have documented their successful release. Two sharks traveled to the southern tip of Baja California and beyond within 90 days, and a third with a 30-day tracking tag headed to waters near Santa Barbara. The fourth shark, tagged and released near Santa Barbara after 11 days in Monterey, was caught and released in good health just a few days later by a commercial fisherman in Santa Barbara.

The sharks have been powerful emissaries for ocean conservation, and have contributed to aquarium field studies of juvenile great white sharks that are adding to the little that's know about the life histories in the wild of these top ocean predators.

During her 69 days on exhibit, the most recent shark grew from a length of 5-foot, 3-inches and just under 80 pounds to a length at release of 5-feet-5 inches and a weight of 100 pounds. During her stay she fed exclusively on mackerel offered by aquarium staff, eating up to three percent of her body weight each day, Hamilton said.

She had not yet reached a size where human safety or animal welfare concerns were a factor in the decision to release her, Hamilton said. Rather, the change in her behavior prompted the decision, he said.

Over Halloween weekend, she received a superficial bite wound, was observed chasing scalloped hammerhead sharks in the exhibit, and bit and injured a Galapagos shark, Hamilton said.

"We monitor the behavior of great white sharks very closely while they're on exhibit," he said. "When we saw a new pattern of aggressive behavior, we decided it was best to release her."

In addition to bringing five young great white sharks to Monterey since 2004, the aquarium has conducted eight field research seasons in southern California since 2002 as part of its ongoing Juvenile White Shark Project. With its scientific partners, the aquarium has collected DNA samples, tagged and tracked 29 young sharks in the wild.

The aquarium will begin a ninth field season of white shark conservation research next summer. Because of planned renovations of the Outer Bay exhibit that start in late August 2010, there will be no attempts to bring another young great white shark to Monterey until summer 2011 at the earliest.

Data from tracking tags placed on adult and juvenile white sharks are providing new insights into their far-ranging travels in the eastern Pacific. Real-time tag data and published research can be found on the Tagging of Pacific Predators (TOPP) website, www.topp.org.

Data from young white sharks tagged since the field project began in 2002 have been published in the scientific press, documenting the sharks' use of nearshore waters in California and Mexico as "white shark nurseries."

The exhibit of young great white sharks is part of the aquarium's effort to change public attitudes and raise awareness about the threats facing these top ocean predators.

In 2004, the first female white shark exhibited in Monterey became "the most powerful emissary for ocean conservation in our history," according to aquarium Executive Director Julie Packard. The shark was part of the aquarium's Outer Bay exhibit for six and a half months and was seen by more than a million people between September 15, 2004 and March 30, 2005. In follow-up surveys, visitors reported coming away with a deeper understanding of the need to protect white sharks and their ocean homes as a result of seeing the shark on exhibit.

Collectively, the four sharks exhibited at the aquarium have been seen by nearly two-and-a-half million people. Since 2002, the aquarium has allocated more than $1 million toward field studies of adult and juvenile white sharks – research unrelated to the effort to put a white shark on exhibit.

Exhibiting white sharks has been the subject of a focused multi-year effort. This approach, developed in consultation with a panel of independent shark experts, is designed to minimize the stresses of collection, holding and transport.

The aquarium's million-gallon Outer Bay exhibit was designed for pelagic (open ocean) animals like white sharks. When each shark is brought to Monterey visitors see the animals face-to-face, and learned about shark conservation issues in conversations with staff and volunteer guides; through an auditorium program devoted to the white shark project; and through exhibit graphics that address the threats facing white sharks.

"I can't overstate the impact of this single animal on advancing our mission to inspire conservation of the oceans," Packard said of the first white shark the aquarium had on exhibit. In addition to supporting shark conservation efforts through its exhibit and field research programs, the aquarium's Seafood Watch initiative creates pocket guides for consumers and education campaigns among restaurateurs and major buyers aimed at transforming the seafood market in ways that support sustainable fishing and fish-farming.