Reanimator: How To Cryopreserve Fish Embryos And Bring Them Back To Life 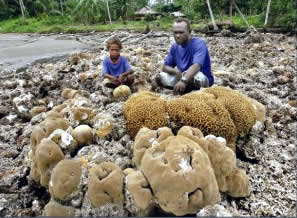 Two locals sit on a coral reef exposed by the April 2 earthquake which lifted the Solomons island of Ranongga about three meters. Photo AFP.

RANONGGA, Solomon Islands -- The force of this week's Solomons earthquake has lifted an island in the South Pacific archipelago and pushed out its shoreline by tens of metres, exposing surrounding reefs.

The remote island of Ranongga in the western Solomon Islands used to have submerged coral reefs that attracted scuba divers from around the world.

But since Monday's massive earthquake in the Solomon Islands, the reefs are now exposed above the water and are dying, an AFP reporter and photographer have seen.

The AFP team, which travelled to Ranongga on a chartered outboard after the quake, saw exposed reefs bleaching in the sun, and covered with dead fish, eels, clams and other marine life.

The 8.0-magnitude quake, caused by a shift in the Earth's tectonic plates, triggered a tsunami that killed at least 34 people in the remote western Solomons and left 5,500 homeless.

Aid agencies have yet to reach Ranongga, but the AFP team saw the devastation that has permanently altered the geography of the island, 32-kilometres long and 8-kilometres wide.

Although Ranongga escaped the fury of the tsunami, the seismic upheaval from the quake pushed out the shoreline by up to 70 metres, local resident Hendrik Kegala also said.

"Water go back and not come back again," he added, saying the whooshing sound of the receding water and the shaking from the quake occurred simultaneously.

The loss of the reefs was a huge blow for the fishing communities that are dotted along Ranongga's coast, said Jackie Thomas, acting manager for Worldwide Fund for Nature (WWF) in the Solomons.

"The fish from the reefs are the major source of protein for the villagers," she told AFP from the provincial capital Gizo.

"They use shells for tools and rely on the sea for many of their basic needs.

"It just shows the incredible force of the earthquake, to move a whole island."

She said the reefs around Ranongga were a protected marine environment and locals had worked hard with WWF in recent years to ensure that they were managed sustainably.

"Now it's another marine environment that has been destroyed," she said.

"Who knows if the coral reefs will recover and the fish will come back? Villagers will have to travel further to find the same sort of food and nutrition they've relied on -- the whole food chain has been disrupted."