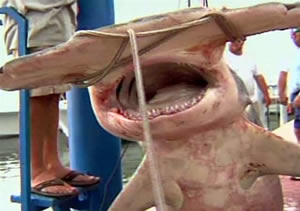 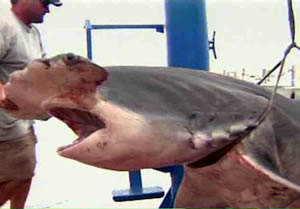 The mighty beast with mouth agape 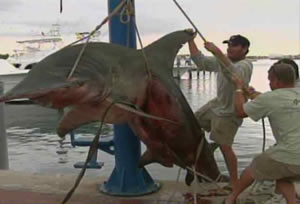 Fritz Van Der Grift was fishing off of Singer Island in Palm Beach County when he snagged the shark, which he says he never intended to kill. He just wanted to get its picture, but the shark died during the struggle.

"I saw that huge shadow, and I was like, 'I can't believe it,'" Van Der Grifd said. "So, I just grabbed the reel and started reeling."

It may not be the biggest ever caught -- the current record is 1,280 pounds -- but it impressed the crowd on the island.

The shark's organs will be flown to a San Diego laboratory for research. Biologists say they plan to get six or seven different studies from the animal, preventing the shark's remains from going to waste.