Crocodile 'Jaws III' Too Big to Mate; Search On For Large Female 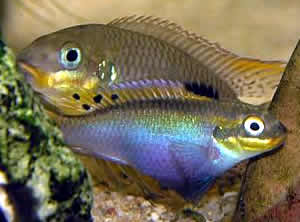 BONN, Germany -- For the first time, biologists have described the evolution of the size of a female trait which males use to choose a partner. The research, published in the open access journal BMC Evolutionary Biology, shows that male cichlid fish prefer females with a larger pelvic fin and that this drives females to grow fins out of proportion with their body size.

Sebastian Baldauf from the University of Bonn, Germany, worked with a team of researchers to study the effects of female ornamentation in the African cichlid fish Pelvicachromis taeniatus. He said, "In contrast to the well-known phenomenon of sexual selection influencing male traits, the expression of female ornaments in relation to body size is almost completely unexplored".

Female P. taeniatus develop exceedingly large pelvic fins, which differ from male fins in shape and color. During courtship, females fan out their violet pelvic fin, suggesting that the fin is actively used during mate choice. The researchers found that males clearly preferred females with a larger pelvic fin and that pelvic fins grew in a more disproportionate way than other fins on female fish.

According to Baldauf, "Our study is, to our knowledge, the first to show that male choice might scale the proportions of a female sexual trait, and therefore has implications for the understanding of the relationship of female traits with body size".