Study Reveals The Genetic Secrets Of The Pacific Sea Louse; 'First We Need To Do The Basic Science'

Study Helps Preserve Arctic Whale, Eskimo Subsistence Hunt; 'Science Was On Our Side' 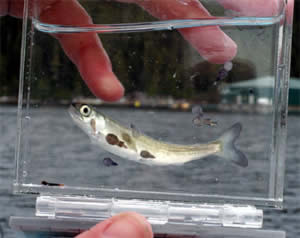 A salmon specimen with sea lice. Photo: A. Morton

VICTORIA, British Columbia -- Sea lice found in the Pacific Ocean are very different genetically from sea lice in the Atlantic Ocean, a study team co-led by a University of Victoria researcher has found.

The discovery could have significant management implications for wild fisheries and aquaculture in BC, since it had previously been assumed that research on salmon and louse interactions in the Atlantic directly applied to sea lice everywhere.

“Now we know this may not be the case,” says UVic biologist Ben Koop. “We can still learn from one another, but it’s likely that a made-in-BC solution is required here.”

Sea lice are tiny marine parasites that feed on the skin and flesh of host fish, weakening and, in some cases, killing them. Each year, sea lice cost the Canadian aquaculture industry millions of dollars in economic losses. Sea lice are also at the centre of an ongoing debate in BC over the risks posed to wild salmon by open net salmon farms.

“Because the salmon-louse issue is so relevant to BC we were asked to look at it from a genetics perspective,” says Koop, who is working with researchers at Fisheries and Oceans Canada, Simon Fraser University and Vancouver Island University. “Policy decisions will be made by others, but first we need to do the basic science.”

Koop and colleagues are already world leaders in salmonid genomics. Over the last five years, they’ve identified about 90 per cent of salmonid genes and developed a new research tool for studying what each gene does. The tool is now widely used by researchers around the world.

The GiLS team is using similar techniques to decipher the sea louse genome. Already, it has identified 10,000 genes, which it estimates is about 75 per cent of the total.

In the process, the team has discovered that the Pacific and Atlantic forms of salmon louse, which look identical, differ genetically by about 10 per cent—a margin comparable to a human and a chimpanzee.

The Pacific salmon louse is found throughout the North Pacific from BC to Tokyo and likely separated from its Atlantic cousin about five million years ago, says Koop.

“This genetic divergence helps explain why there are some observed differences in pathology between the two forms,” he says. “For example, Pacific lice don’t seem to be as aggressive in terms of making big lesions on the fish.”

The team’s next step is to determine differences at the genetic level in how the two forms of lice infect fish, including factors such as host species and size, and water temperature and salinity.

“It’s very possible that the immune system of Atlantic salmon responds very differently to the Pacific louse,” says Koop. “This means that current treatments used by BC salmon farms to control lice may need to be modified, or at the very least, we have to look at that possibility.”