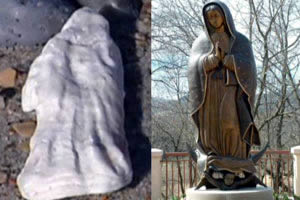 UNC Wilmington Senior Tom Benedict was strolling along Wrightsville Beach when he stumbled upon a seemingly sacred sea shell.

"I saw it in the sand, looked down and said, man this really looks like the Virgin Mary. I have to do something with this."

The devout look and the flowing dress seem to draw a striking resemblance to some who saw the shell.

"Originally I thought it was a fish and then when you look at it right side up it looks like the Virgin Mary," said John Poulos, a local fisherman.

Benedict is not very religious, so he hopes to pass the shell along to someone who is, for the right price of course.