Unusual Orange Lobster 'Gumbo' Saved From The Pot; 'I've Never Seen Anything Like It In 25 Years'

U.S. Fisherman Could Get 20 Years for Lobster Offences

Researchers: Orange Peels May Clean Up The Ocean By Soaking Up Mercury 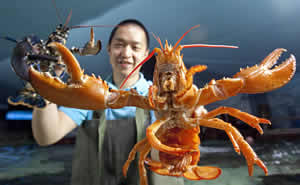 The unusual orange color of the North American lobster, Gumbo, can be seen next to a smaller European lobster (left). Â© Birmingham Sea Life Centre

LONDON, U.K. -- What's unusual about this orange lobster? Its alive! Lobsters are usually a brownish-green color when living and turn orange when they have been cooked. But a rare live reddish-orange colored specimen has been spotted in the UK.

The North American lobster, named Gumbo, is so unusual that its been saved from the cooking pot and settled into a new home at Birmingham National Sea Life Centre.

Before it reached the Sea Life centre, Gumbo stayed at the Natural History Museum in London. The Museum was alerted to the striking specimen by Rex Goldsmith the fishmonger. 'I've never seen anything like it in 25 years in this business,' Rex said.

Museum crustacean researcher Paul Clark was astounded by the spectacular carapace color and agreed to help Rex find a permanent home for the lobster. 'I was able to set up a saltwater tank here at the Museum to keep him alive until Sea Life agreed to take him and arrange collection.'

Lobster shells generally have blue, red and yellow pigments, that give them their brownish-green color when they are alive.

Their diets consist of shrimp, algae and other sea creatures that contain cartenoid pigments.

The cartenoids bind with proteins in the shell but when lobsters are cooked, they break down and free the red pigment, giving them their reddish-orange color.

They are larger than species usually found around the UK and also more aggressive. Examples of these are regularly brought to Billingsgate fish market in London, which is where this specimen came from.

Paul Clark said, 'Recent captures of American lobsters by fishermen on the Sussex coast are a serious concern as Homarus americanus can carry diseases that are harmful to the European lobster Homarus gammarus.'

Experts at the Sea Life centre had to chose a new home carefully for this non-native species. 'Our coastal centers all circulate seawater direct from the sea,' said Sea Life curator Graham Burrows. 'Birmingham Sea Life has a closed system so there is no risk of anything that shouldn't leaking out into the wild.'

Lobsters are crustaceans, along with crabs, shrimps, and smaller creatures such as the microscopic copepods. They are arthropods and have rigid external skeletons, which are periodically shed to enable the animal to grow into a new and larger skin.

Miranda Lowe looks after the Museum's crustacea collection. This includes around 44,000 samples and species collected during the Discovery scientific expeditions of 1925-1951. From crabs, krill and shrimp, to 27,000 jars of plankton samples, these important collections may contain species that that are now extinct in the world's oceans.

Miranda comments on the lobster Gumbo, 'I had heard about lobsters looking like this but it was amazing to see one this color and alive'.

'There are only 5 specimens of this species in the crustacea collection and none with such vivid orange color. Two of our specimens from this collection were found in UK waters in the 1980s.'

American lobsters can weigh up to 2Okg, and Gumbo, who is still a youngster, is currently just over 1kg. 'As he is still growing he will moult his shell fairly frequently,' said Graham.

'It will be fascinating to see whether his new carapace is the same stunning orange color. We think it's a genetic abnormality and that he will therefore stay the same color for life.'

Gumbo has been given a spacious home in the Bay of Rays display, which he shares with rays, spider crabs and gurnards.