Texans Snare 'State Record' 880-pound, 14-foot Alligator With 'Secret Recipe Of Chicken And Some Other Stuff' 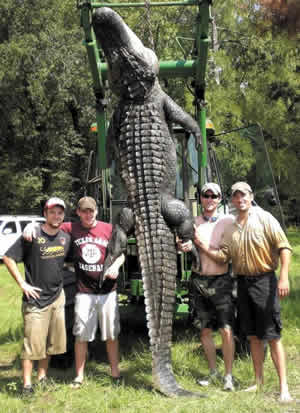 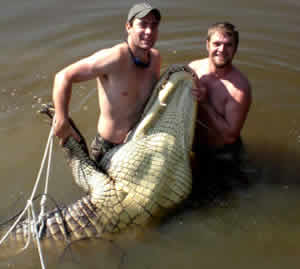 Tommy and Justin with the alligator 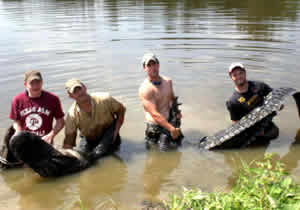 The whole capture team with the alligator

LUFKIN, Texas -- A Lukin man and his friends can certainly attest to the saying that everything's bigger in Texas after snagging what may be a state record alligators.

Justin Wells of Lufkin, Tom Bass of Dallas, Jarrett Hanus of Spring and Ryan Haltom of Houston set the baits together Thursday night at the Gospel Ranch, which is about five miles outside of Trinity.

"It was the experience of a lifetime, and I'm glad (Ryan) took me out there on it," said Wells, a Lufkin High School graduate and SFA forestry student. "I don't think we'll ever catch one bigger than that."

"We'd gotten word back in the spring time that there was a big gator out there," said Haltom, a wildlife biologist and land management consultant, "so me and Tommy had gone out there several times and scouted and seen quite a bit of gator activity and videotapes of gators."

Ranch manager Larry Denson had spotted the big gator, prompting them to get tags for the season, and Thursday night was just "kind of a last-minute deal before the season was over," Haltom said.

Using the hook-and-line method, the group anchored a rope to a tree, left enough rope so the gator could run with it, and hung a 14-ought treble hook about a foot above the water with their own "secret recipe of chicken and some other stuff."

"We can't let too many secrets out of the bag," Haltom said.

When they showed up Friday morning, they had a line in the water, but when they started pulling on it, it was tangled. Not knowing whether the gator was dead or alive, the four slowly made their way through the 6- to 7-foot-deep water to untangle the gator and tie some ropes around him to drag him out. But they quickly discovered it wasn't going to be that easy.

"He drowned himself," Wells said. "We believe he just dove underneath the water and got tangled up in a stump, and gators have to come up for air every 15 minutes, so we were pretty sure he was dead, but we still weren't sure."

"Once we figured out he was dead and he wasn't going to get us," Haltom said, "we started diving down and feeling on him and we realized he was big. We could stand on top of him and we were head and shoulders above the water. That's when we knew he had to be a big guy.

"The scales kind of change. On his belly there's big, slick scales, or tiles, and as you get toward their mouth it gets into some softer leather, and we got to feeling around and thought, 'OK, this is his mouth.' But when we got to tying him up, we realized it wasn't his mouth — it was his leg."

They broke a 400-pound test rope before realizing that "a truck and a rope wouldn't do it," eventually enlisting the help of a tractor and some chains to finally get the gator out of the water. Next it was off to ranch headquarters to clean him up, hang him for a measurement by Texas Parks and Wildlife, then place him in the bed of a truck filled with ice for the trip to the taxidermist for a full life-size mount.

"You couldn't tell what we had in the bed of the truck because we had a ton of ice on him," Haltom said. "We went and cleaned Brookshire Brothers out. We had 400 pounds of ice on him."

"I get excited right now just thinking about it," Haltom said. "When I reached down there and grabbed that claw and we got to looking at each other, we were jumping around, high-fiving, and we were actually saying the words, 'state record.'"

The gator wound up weighing in at 13 feet, 10 1/2 inches long and 880 pounds. And while they don't know yet whether their gator is an official state record — "Until I see it on a piece of paper from Parks and Wildlife, I'm just going to say it's a potential," Haltom said — the guys had some heavy celebrating to take care of over the weekend.

"We immediately drove to Houston and went to Beeville to go dove hunting and celebrate," Haltom said. "And we were tired puppies, let me tell you.

"Not knowing what we were getting into when we were walking into the water, it was an adrenaline rush," Wells said, "and when we finally figured out how big it was, you just can't even describe the feeling."

Although Haltom said the four set the baits together and worked to get the gator out, Bass will be written down as the hunter. Once the mount is done, the guys intend to donate it to a museum or find some place to display it.