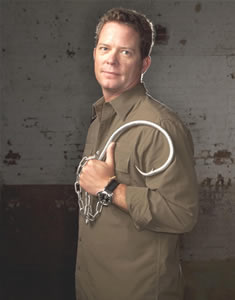 Chris Fischer holds one of the special hooks used for the safe catch and release of the great white sharks. credit National Geographic 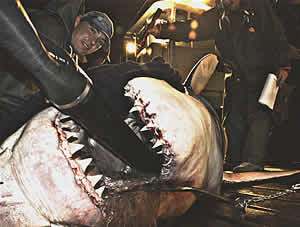 As a sportsman Fischer has caught and safely released lots of giant black marlin each weighing about 800 lbs, but this great white and the other giant toothy predators that followed were the biggest he’s ever caught, examined and then released 15 minutes later unharmed.

It began when Fischer, a board member for The Billfish Foundation (TBF) was asked by Dr. Michael Domeier to help him tag big black marlin off Panama to follow their migratory habits by satellite. An avid billfisherman and billfish scientist, Domeier happens to be a great white shark scientist as well.

“When he saw Ocean our 126 ft., mothership he asked if I would be able to catch and safely lift a great white shark on it for scientific research he wanted to do,” said Fischer. “We have a hydraulic lift to pick-up a 75,000 lb game boat. I said ‘sure. We can build a fence around the lift and swing a great white over it.’

“I felt we were the only people in the world who can safely capture these giant beasts of the ocean, pick them out of the water and let them go in good shape because of the lift and my crew of very talented world game anglers and captains,” as Fischer described Jody Whitworth and Brett McBride two legendary captains among his team members.

“I self-funded it, because we don’t really know much about great white sharks or other huge fish. It was a kind of a moral obligation to help Dr. Domeier solve this puzzle because I thought we would be the only people in the world who could do it for him. No one has ever had the ability to deliver mature specimens to scientists in remote locations because they are so big.

“Like in the movie Jaws, the first time we saw a shark come in and eat the bait and then take off and drag the buoys under and across the water it was a life-changing moment as an angler. The angling experience of capturing and releasing giant great white sharks is nothing similar to an angling experience of capturing a large pelagic fish. There’s a sense of history, a sense of awe, humility and humbleness. When a shark comes into the pattern under the back of the boat you look over at your bro and you’re all taking a step back. That thing is going to eat and we don’t want anyone to die today,” Fischer said with a smile describing that moment.

They even named the first great white they caught and released Bruce for the mechanical sharks used in the 1975 movie thriller classic.

Like a tenacious angler trying to get his quarry it took Fischer two years of pitching his project before National Geographic bit after seeing his exciting and extensive footage.

“I promised Dr. Domeier I would help him get these tags out and I went back and funded it a second year to help him finish this TV project and continue his science. Because of the severe down turn in the nation’s economy, if I couldn’t sell it I would have to sell my ship and get rid of everything. I was getting down to my last liquid dollars.”

“And the episodes have the adventures of writer Zane Grey with many elements of the Deadliest Catch.” Fischer has won multiple Emmys for his recent Offshore Adventure series and other shows over this current decade. Actor Paul Walker another TBF board member and avid billfisherman helped on his crew.

“Monday night’s show is kind of a sneak peak during Expedition Week for the 10 hour series to run next summer,” said the highly passionate Fischer for his project. “The show is called Expedition Great White. We caught what we estimated to be a 4,600 lb great white based on length and girth.

“The first thing I did was call my buddies at the IGFA (International Game Fish Association) the world record keeping body, and Salt Water Sportsman magazine and asked them what was the biggest fish ever caught and released alive. Figures were in the 2,000 lb range on recreational tackle. I sent them this picture and they said nothing has been caught and released alive that big. We caught three of them over 4,000 lbs., the three biggest fish ever in history, caught and released alive. A specially designed system is used to keep each alive. The exam includes a blood draw by Dr. Domeier to check hormone levels, measurements, sperm samples taken, and tagging by attaching a tracking antenna to the dorsal fin before releasing.

“So it’s been great as the data is pouring in. Dr. Domeier is beginning to solve the puzzle of the great white shark; where they breed, where they feed, where they give birth so we can look after them and protect these areas. We’re learning so much new science.”

And work continues on the life cycle and migratory habits of billfish.

“Early next year we’re helping Dr. Domeier put out black marlin tags in the Puerto Vallarta fishery,” said Fischer. “He’s an avid big time black marlin and striped marlin angler and an active advisor to the TBF board. We support him and his science anyway we can.”

For more on the show which will be broadcast at 9 pm ET/PT, go to the Nat Geo website at http://channel.nationalgeographic.com/series/expedition-week/ .