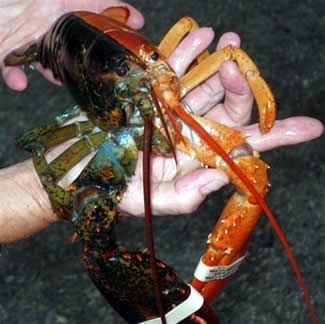 The lobster caught in Dyer's Bay is a typical mottled green on one side; the other side is orange.

BAR HARBOR, Maine -- An eastern Maine lobsterman caught a lobster this week that looks like it's half-cooked.

The lobster caught by Alan Robinson in Dyer's Bay that is a typical mottled green on one side; the other side is a shade of orange that looks cooked.

Robinson, of Steuben, donated the lobster to the Mount Desert Oceanarium. Staff members say the odds or finding a half-and-half lobster are 1 in 50 million to 100 million. By comparison, the odds of finding a blue lobster are about 1 in a million.

Robinson, who has been fishing for more than 20 years, said he didn't know what to think when he spotted the odd creature in his trap.

"I thought somebody was playing a joke on me," Robinson said. "Once I saw what it was ... it was worth seeing."

Bette Spurling, who works at the oceanarium, said lobster shells are usually a blend of the three primary colors: red, yellow and blue. Those colors mix to form the greenish-brown color of most lobsters. This lobster, though, has no blue in half of its shell, she said.

Bernard Arseneau, a former manager at the oceanarium's lobster hatchery, said lobsters also have a growth pattern in which the two sides develop independently of each other.

The oceanarium has received only three two-toned lobsters in its 35 years of existence, staff members said.