Scientists: Lone Whales Shout To Overcome Noise; 'There Is A Physical Limit'

Researchers: Whales May Turn Down Their Hearing Sensitivity When Warned Of An Impending Loud Noise

Study: Global Sea Rise Beyond 6 Feet 'A Near Physical Impossibility' 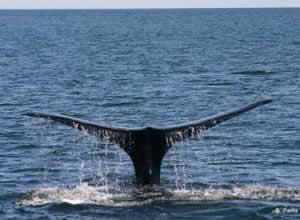 This is a North Atlantic right whale diving with tail in the air. Credit: Susan Park, Penn State

UNIVERSITY PARK, Pennslyvania -- Just like people in a bar or other noisy location, North American right whales increase the volume of their calls as environmental noise increases; and just like humans, at a certain point, it may become too costly to continue to shout, according to marine and acoustic scientists.

"The impacts of increases in ocean noise from human activities are a concern for the conservation of marine animals like right whales," said Susan Parks, assistant professor of acoustics and research associate, Applied Research Laboratory, Penn State. "The ability to change vocalizations to compensate for environmental noise is critical for successful communication in an increasingly noisy ocean."

Right whales are large baleen whales that often approach close to shore. They may have been given the name because they were the right whales to hunt as they are rich in blubber, slow swimming and remain afloat after death. Consequently, whalers nearly hunted these whales to extinction. Currently right whales are monitored to determine the health and size of the population. The northern and southern right whales are on the endangered species list.

Whales produce upcalls, sometimes called contact calls, when they are alone or in the process of joining with other whales. An upcall begins low and rises in pitch. It is the most frequent call produced by right whales.

The researchers' data came from right whales tagged with acoustic suction cup tags. They listened to tag recordings from seven male and seven female whales totaling 107 calls. The tags recorded from 2 to 18 calls each. The team looked at received level, duration and fundamental frequency of the calls, and they compared background noise levels with the call-received levels of the individual calls. Noise below 400 Hertz dominated the recorded background noise. These frequencies overlap with the frequencies of right whale upcalls. Much of the increase in background ocean noise in right whale habitat is believed to be due to commercial shipping.

"To our knowledge, this is the first evidence for noise-dependent amplitude modification of calls produced by a baleen whale," said Parks.

Changing calling patterns can, however, incur costs including increased energy expenditure, alteration of the signal and the information it contains, and increased predatory risks. With increased noise the effective communication range for feeding or mating will shrink and stress levels on individual animals may rise.

"Whether they can maintain their communication range in noisier environments still needs to be tested," said Parks. "Ocean sound levels will probably continue to increase due to human activities and there is a physical limit to the maximum source level that an animal can produce."

Another implication for potential changes in whale calls is that upcalls are the whale calls that conservationists use to monitor right whale populations. They do this using automated acoustic sensors that are looking for specific parameters to tease out the whale calls from other noises.

The research team cautions that "Variability of call parameters also can reduce the effectiveness of detection algorithms and should be taken into account when calculating the probability of detection in different habitats."

The National Oceanic and Atmospheric Administration and the Office of Naval Research supported this work.