Scientists: Lead from Aussie Mine Found Spewing from Underwater Volcano in Mediterranean

Research: 20th Century Sea-Level Change Was Overestimated Before It Was Underestimated 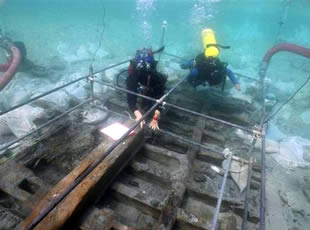 Divers inspect an 8th century shipwreck in the Mediterranean. It's the only ship from that time found in the region.

HAIFA, Israel -- An 8th century shipwreck was discovered off Dor Beach and excavated by researchers from the Leon Recanati Institute for Maritime Studies of the University of Haifa. It is believed to be the only boat from this period discovered in the entire Mediterranean region.

"We do not have any other historical or archaeological evidence of the economic activity and commerce of this period at Dor. The shipwreck will serve as a source of information about the social and economic activities in this area," said Dr. Ya'acov Kahanov from the Leon Recanati Institute for Maritime Studies and the Department Of Maritime Civilizations at the University of Haifa.

The wreck itself was found almost a decade ago during a joint survey of the area conducted by an expedition of the Institute for Maritime Archaeology from the University of Texas A & M and the Institute for Maritime Studies at the University of Haifa. Using carbon dating techniques, the wreck was dated as from the early 8th century. Only now, after the completion of the latest excavation season, are the details of the 1,300 year old shipwreck becoming clearer.

The small boat, 15 meters long and 5 meters wide, was involved in local commerce and sailed along the Lavant coast between the posts on the Mediterranean Sea. It was found in a lagoon off Dor Beach, 0.75 meters beneath the surface of the water. Dr. Kahanov explained that this ship is a rare find given the amount of wood that has remained intact and in a good state of preservation. In addition to the wooden hull of the boat, many of the boat's contents have also been preserved. Among them are 30 vessels of pottery of different sizes and designs containing fish bones, ropes, mats, a bone needle, a wooden spoon, wood carvings and food remains, mainly carobs and olives.

Dr. Kahanov stressed the importance of this find owing to the fact that there are so few archaeological finds from the ancient Islamic Period in this area.