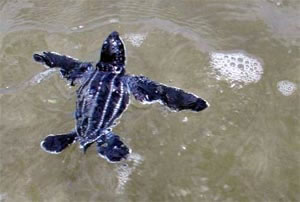 KUALA LUMPUR, Malaysia -- The iconic leatherback turtle is virtually extinct in Malaysia, and there are fears their numbers are on the decline worldwide as habitats vanish, according to a United Nations report.

The report released through the UN Environment Programme (UNEP) says the population is also waning due to legal and illegal egg harvesting and turtle hunting, while global climate change could affect breeding.

Malaysia, which in past years offered turtle nesting as a tourist attraction in eastern Terengganu state, offers one of the "most dramatic" examples of decline in a marine turtle population, it says.

"Whereas leatherback turtle nests along the Terengganu coastline used to number in the thousands in the 1960s, in recent years only a handful of infertile nests have been laid," said a UNEP statement released on Monday. "That population is effectively extinct, depriving Malaysia of one of its most charismatic tourist attractions."

According to the report, Malaysian leatherback rookeries have declined from approximately 5,000 nests per year in the 1960s down to less than 10 nests per year so far this decade.

The report, prepared under an inter-governmental initiative to save marine turtles, said leatherback nests are found in four main areas in the Indian Ocean and Southeast Asian region - a span which includes South Africa, Sri Lanka, Malaysia and eastern Australia.

But a lack of basic information about the leatherbacks, such as where they feed and their migration routes, is hindering conservation efforts, while global climate changes could affect populations, the report says.

A companion report has also found that leatherback populations are under pressure after the December 2004 tsunami destroyed or damaged nesting habitats in 11 countries. "India, Thailand and Sri Lanka were the worst affected, with some nesting beaches having been completely destroyed," said the UNEP statement.