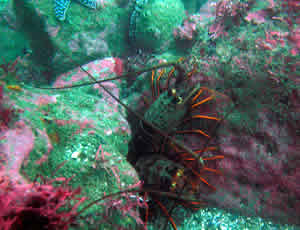 SAN DIEGO, California -- California spiny lobsters in the Point Loma kelp bed in San Diego move anywhere from 50 meters to 1 kilometer every night scavenging for food. By morning, many return to a home area, which on average is about 100 square meters.

"What the study says to me is ‘wow,' lobsters move around a lot more at night than I thought," said Charlie Graham, a commercial fisherman in Santa Barbara who is familiar with Hovel's results.

"The art of lobster fishing is deciding where and when to set traps," Graham said. "The research tells me I can be happy setting my traps a little farther from the beach and letting them (the lobsters) come to me. I don't have to risk losing a trap by putting it near the surf grass."

Hovel's findings are based on two seasons of tagging and tracking data and on a series of dive surveys that let the scientists correlate lobster movement patterns with specific environmental features.

"The take-home message is that lobsters move a lot," Hovel said. The average lobster moved about 400 meters a night, through there was a range of 50 meters to 1 kilometer. "We also showed lobsters move among habitats more than expected," Hovel said.

Another discovery has been that spiny lobsters do not "home" to specific shelters – a special rock crevice, ledge or rock pile, for example. Instead they seem to have fidelity to a particular area, usually about 100 square meters with many sheltering areas in it.

The results of the study can help in stock assessment and in identifying habitat areas that are critical for sustaining a lobster fishery, he said.