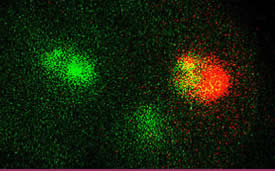 CHEVY CHASE, Maryland -- The glow emitted by a variety of sea coral helped Russian scientists harness the protein that generates the light to create a tiny fluorescent tag that responds to visible light. The two-color tag should help researchers follow individual proteins as they dart around inside living cells.

Under a microscope, the two-color tag—called Dendra because it is derived from the sea coral Dendronephthya—first shows up as a green glow, highlighting the otherwise invisible protein to which it is attached. The green turns to red when the tags are zapped with an intense pulse of visible blue light.

The dramatic color change “makes it possible to precisely label an object, such as a cell, organelle, or protein, with a flash of light and then to follow the object’s movement over time,” said Konstantin Lukyanov, whose group conducted the Dendra research in the lab of his brother, Sergey Lukyanov, a Howard Hughes Medical Institute (HHMI) international research scholar at the Shemyakin-Ovchinnikov Institute of Bioorganic Chemistry of the Russian Academy of Sciences in Moscow. “This tool opens new possibilities for studying protein and organelle dynamics in living cells, cell migration during embryogenesis, inflammation, and other pathological and normal processes,” he said.

Unlike other green-to-red fluorescent markers, Dendra can be activated by visible blue light, which is less harmful to living cells and does not require special laser equipment, Konstantin Lukyanov explained. In fact, the light source of the laser-scanning confocal microscopes that researchers commonly use to peer into living cells can activate the tag, which should make the new tool useful to many scientists, said Sergey Lukyanov, whose lab reports on the Dendra tag in the April 2006 issue of Nature Biotechnology, published in advance online on March 19, 2006.

Importantly, Dendra is small enough to highlight proteins without interfering with their folding or function. And the researchers have demonstrated that it can switch shades at the body temperature of birds and mammals, which are popular research models. Its usefulness is further enhanced by the fact that it stays red for long-term protein tracking, Sergey Lukyanov explained.

Dendra is the latest addition to the growing family of photoactivatable fluorescent proteins (PAFPs), innovative imaging tools first made possible by Douglas Prasher, who isolated the gene for green fluorescent protein (GFP) from a species of bioluminescent jellyfish in 1992, and Martin Chalfie, who first used GFP for labeling in 1994, said Marc Zimmer, a computational chemist at Connecticut College and author of Glowing Genes: A Revolution in Biotechnology (2005). Since then, HHMI investigator Roger Tsien has developed a veritable rainbow of refined high-performance GFP mutants.

Meanwhile, Sergey Lukyanov and other researchers had discovered that certain wavelengths of light could cause striking spectral changes in some proteins, which could convert from dark to light or change colors. Later, the Russian scientist and his colleagues discovered that the GFP-like protein they isolated from Dendronephthya had this capacity to change color, but it was too big to be useful for many research applications.

So the Lukyanovs and colleagues set out to create a smaller and more versatile version of their fluorescent protein. They systematically mutated the DNA sequence that encodes the fluorescent protein, then expressed the resulting mutant proteins in bacteria until they found one that could be irreversibly converted from green to red.

As with GFP, the sequence for Dendra and an accompanying short amino acid tail can be inserted into the gene encoding the protein a scientist wants to study. In living cells, the fluorescent tail is produced along with the protein, acting like a beacon to researchers who want to learn what the main protein does and where it goes.

To test how well the new tag labeled and tracked target proteins, the team fused Dendra to proteins that form the cytoskeleton of the cell, including actin and tubulin filaments and found the expected patterns of intracellular protein distribution.

Dendra belongs to a small family of green-to-red PAFPs. The first protein in this family, Kaede—which is Japanese for maple leaf—was discovered by Japanese researcher Atsushi Miyawaki four years ago. "All known Kaede-like proteins are sensitive to ultraviolet light irradiation, which results in immediate conversion from green to red fluorescence, but they are not sensitive to blue light," Konstantin Lukyanov said.

So the researchers did not expect Dendra to be activated by low-toxic visible light. "It was very surprising for us to observe an efficient Dendra photoconversion upon illumination with intense blue light," Konstantin Lukyanov said. "We still have no clear explanation for why Dendra differs from other Kaede-like fluorescent proteins."

Sergey Lukyanov pointed out that the ultraviolet light required to activate many PAFPs can be toxic to cells, and can dramatically alter their biochemistry. Further, the equipment needed to generate ultraviolet light can be expensive and in short supply. “We anticipate that Dendra will broaden considerably the circle of PAFP users,” he said.