Water Can Used on London Whale Sold on eBay for Â£2,050

No Valid Bids During eBay Auction for Key West Artificial Reef Naming Rights; 'None Were Serious'

Plastic For Dinner: A Quarter Of Fish Sold At Markets Contain Man-Made Debris 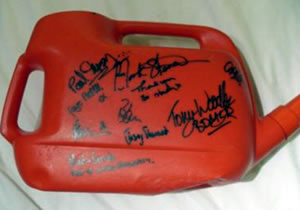 LONDON, England -- The watering can used to hydrate the whale stranded in the Thames has been sold on online auction site eBay for Â£2,050.

All proceeds will go to the British Divers Marine Life Rescue which led the operation to save the creature.

The effort cost Â£5,000 and the BDMLR is keen to recover as much of that as possible.

Bidding in the last few minute was fierce, with the highest offer more than doubling in the final moments.

The group said the auction gave bidders a "chance to own a symbol of hope, a piece of history and donate to a worthy cause all at the same time".

BDMLR diver Fay Archell told Sky News she was "ecstatic" about the result.

"It will make a huge difference to our organisation and will help to pay for more whale rescue equipment," she said.

The 18ft northern bottle-nosed whale died as it was being taken back out to sea.

A post-mortem showed its death was due to a number of problems including dehydration, muscle damage and failing kidneys.