Female Fish -- And Humans? -- Lose Interest When Their Male Loses A Slugfest 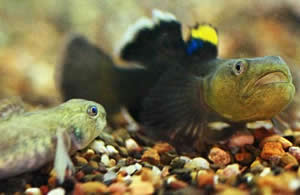 MELBOURNE, Victoria -- After studying male desert goby fish, a team of Monash researchers has suggested that male sexual behavior is primed to produce the greatest number of offspring.

In the underwater world of desert goby fish, it is the males whose work is never done.

As exclusive parental guardians it is up to males to guard and fan the eggs â keeping them well-oxygenated and removing debris - while females flit about finding new mates.

It had been thought females selected breeding partners based on the quality of their parental care. Another assumption was that the males were so diligent at caring for the eggs they might even show off their parental skills to attract cruising females.

In collaboration with Monash honors student Nicholas Symons and a postdoctoral researcher, P. Andreas Svensson, Dr Wong and his team set out to discover what really motivates these little fish. A paper based on their research has just been published in the journal PLoS ONE.

"We found that when egg-tending males were in the presence of a female they spent more time outside their nest engaged in courtship rituals and less time inside the nest fanning their eggs, which they did in shorter bouts and less often."

"While we didn't measure what impact this had on females, it was significant that all of the males displayed a similar drive to leave the nest to attract potential mates."

Dr Wong said the evolutionary tradeoff demonstrated by male desert gobies was that it was worth engaging in behavior that could result in the loss of some eggs, for the chance to mate and produce more eggs with a new female.

"Parental effort and courtship are not compatible," Dr Wong said.

"In lay terms, you could speculate that as far as male desert gobies are concerned, the way to a girl's heart is to display your affections, while demonstrating you're a good father is secondary."

Dr Wong said the real value of the study is that it highlights the importance of understanding the circumstances under which reproductive tradeoffs can occur and how these could influence male reproductive decisions.

"People tend to think of reproduction as a harmonious venture between the sexes but we are beginning to see that this is not always the case," Dr Wong said.

"Male and female reproductive interests are seldom the same and, from a male perspective, it could make reproductive sense to be courting more females to try to maximize reproductive gains."

Dr Wong said the study adds to a body of research showing that males, as do females, behave in ways to maximize their reproductive pay offs, even if it might be detrimental to members of the opposite sex.

"In this way, we might be able to gain insights into reproductive conflicts in humans as well because they are issues that are common across species," Dr Wong said.

"Don Juan behaviors aside, such conflicts between the sexes are apparent even in day to day things like who has to take the kids to the school."