Pheromone Linked To Aggressive Behavior In Squid; 'the Extremely Competitive Aggression Has A Payoff'

Paddle Vs. Propeller: Which Competitive Swimming Stroke Is Superior?

Research: Piddling Fish Face Off Threat Of Competition; 'touching The Tip Of The Urinary Pheromone Iceberg!' 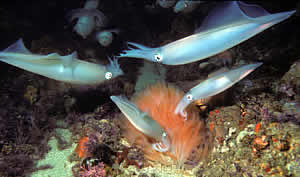 WOODS HOLE, Massachusetts -- Scientists have identified a pheromone produced by female squid that triggers immediate and dramatic fighting in male squid that come into contact with it. The aggression-producing pheromone, believed to be the first of its kind discovered in any marine animal, belongs to a family of proteins found in vertebrates, including humans. Results of the study appear in the February 10th issue of Current Biology.

Male-male aggression is a complex process that involves neural, hormonal, physiological, and psychological stimuli and is widespread in the animal kingdom, where it is associated with the acquisition or retention of shelter and food, and in sexual competition. "The identification of this pheromone as a key component of this signaling system is highly unusual because the male squids need only to come into contact with these protein molecules to initiate the complex cascade of behaviors that we term aggressive fighting," says Roger Hanlon, senior scientist at the Marine Biological Laboratory (MBL) and study co-author.

Squid are highly advanced marine invertebrates with a complex mating system rivaling that of vertebrates. Most mating and egg laying in the longfin squid (Loligo pealeii), the focus of this study, occurs in the spring when the animals migrate from deep offshore waters to shallower waters along the eastern seaboard, from North Carolina to Maine. Females mate multiple times with multiple males, who compete fiercely for females.

In field studies, the scientists observed a visual attraction by male squid to eggs laid on the sea floor followed by an escalation from calm swimming to the highest level of aggressive fightingâeven in the absence of femalesâwhen they physically contacted eggs. Seeking to identify what was triggering the behavior, Hanlon and his colleagues, including Scott Cummins of The University of the Sunshine Coast, Australia, Bernard Degnan of Queensland University, Kendra Buresch of the MBL, Jean Boal and Johanna Holm of Millersville University, and Gregg Nagle of the Medical College of Georgia/University of Georgia Medical Partnership, conducted laboratory experiments at the MBL.

They discovered a protein pheromone produced in the female reproductive tract and embedded in the outer surface of eggs. After purifying the pheromone and presenting it to male squid in the lab, they found the same extreme aggressive responses, even when the protein was "painted" translucently on a glass vial that contained squid eggs. "The contact pheromone was incredibly resistant to degradation," says Nagle. "It appears to remain intact for an extended period of time until the eggs are seen and contacted by male squid."

"Our lab experiments show that the male squid that touches the eggs first becomes aggressive faster than other males who have not yet touched the eggs," says Hanlon. "This leads to dominance by the males that encounter the pheromone. Dominant males pair with the females and mate more often, and they gain greater fertilization success so the extremely competitive aggression has a payoff."

"It was exciting to map an important behavior back to the molecular level," adds Boal. "The research involved careful teamwork among people with very different backgrounds and skills. It was great to be part of such a far-flung and interesting group of scientists."

While there are multiple discoveries of pheromones that can elicit aggression in land-based animals, the scientists maintain that this discovery in squid will help them to understand the critical signaling beneath our oceans. "Squid may have revealed a more direct way of stimulating aggression," says Hanlon. "We doubt that many researchers have thought that contact with molecules in the external world could stimulate such complex and extreme aggressive behavior."

Interestingly, the protein pheromone found in squid has some similarity with beta-microseminoproteins (Ã-MSP), a family of proteins found in humans and other animals. "The functions of Ã-MSP in vertebrates have not been determined, but our findings in squids may inspire other researchers to consider similar functions in higher vertebrates," says Hanlon.