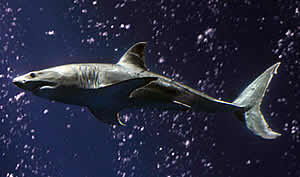 MONTEREY, California -- For the sixth time, the Monterey Bay Aquarium has a young great white shark on exhibit. He was brought to Monterey from Malibu last night (Wednesday, August 31), just 13 days after he was collected by aquarium staff in waters off southern California near Marina del Rey.

The young shark, a four-foot, seven-inch male weighing 43.2 pounds, was brought north in a 3,200-gallon mobile life support transport vehicle. He was collected August 18 by aquarium staff with the help of a commercial fishing crew using a purse seine net. He was quickly transferred to a more than 4-million-gallon ocean holding pen off Malibu, where he remained for almost two weeks. Aquarium staff observed him swimming comfortably and documented him feeding in the pen before he was brought to Monterey and placed in the million-gallon Open Sea exhibit at 7:01 p.m.

The Monterey Bay Aquarium remains the only institution in the world to exhibit a great white shark for more than 16 days, and has successfully returned to the wild each animal kept on exhibit.

As with the five other young great white sharks brought to the aquarium since 2004, the aquarium hopes this one will remain on exhibit for several months, as a way to change public attitudes and promote stronger protection for this magnificent and much-maligned ocean predator.

In 2004, the first female white shark exhibited in Monterey became "the most powerful emissary for ocean conservation in our history," according to aquarium Executive Director Julie Packard. The shark was part of the aquarium's Open Sea exhibit for 6 Â½ months and was seen by more than a million people between September 15, 2004 and March 30, 2005. In follow-up surveys, visitors reported coming away with a deeper understanding of the need to protect white sharks and their ocean homes as a result of seeing the shark on exhibit. Collectively, the five sharks exhibited at the aquarium have been seen by more than two million people.

Since 2002, the aquarium has allocated more than $1 million toward its studies of adult and juvenile great white sharks â research unrelated to the effort to put a white shark on exhibit. Visit www.montereybayaquarium.org/cr/whiteshark.aspx for detailed information about the aquarium's Project White Shark program.

Exhibiting this species has been the subject of a focused multi-year effort by the aquarium. This approach, developed in consultation with a panel of independent shark experts, is designed to minimize the stresses of collection, holding and transport.

In the wild, great white sharks are in decline worldwide, in part because they're slow to reproduce and because of growing fishing pressure that is decimating all shark species. White sharks are protected in California and other U.S. coastal waters, as well as in South Africa, Australia, Mexico and other nations. Their fearsome reputation has made them a target of trophy hunters and the curio trade.

The aquarium encourages the public to get involved in shark conservation by using its "Seafood Watch" consumer pocket guide to selecting ocean-friendly seafood. The guide highlights "Best Choice" fisheries, including those that harm fewer animals â including sharks.

Through its Center for the Future of the Oceans, the aquarium works with other institutions and public agencies to develop best strategies for shark conservation policy in California waters. It also supports creation of a network of Marine Protected Areas (MPAs), including some fully protected marine reserves where fishing is prohibited, along the entire California coast.

The aquarium is open daily through Labor Day from 9:30 a.m. to 6 p.m.; and on Saturdays and Sundays until 8 p.m. (through September 4). Starting September 6, regular aquarium hours are from 10 a.m. to 6 p.m. daily. For more information and tickets, visit www.montereybayaquarium.org.