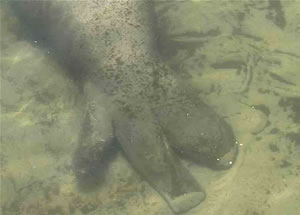 Florida Fish and Wildlife biologists believe that the cold weather has helped to uncover a local mystery; the identity of the mysterious sea monster featured on the TV show MonsterQuest which airs on the History Channel.

As hundreds of manatees huddled to stay warm inside the channel of the Florida Power and Light Riviera Beach Power Plant, one of the gentle sea cows stood out due to a distinct feature of its anatomy.

Thought to have been injured by a boat propeller at some point in its life, the manatee's tail grew back into three separate prongs.

Due to the unusual shape, the manatee leaves three separate wakes on the water's surface while swimming just below.

The Florida Fish and Wildlife Conservation Commission believes that this is the source of the sea creature shown during a segment last year on Monsterquest.

The origin of last year's other sensational underwater story remains a mystery.

A strange creature dubbed the 'Muck Monster' created strange wake patterns on the surface of the Lake Worth Lagoon.