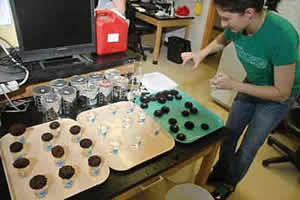 PALO ALTO, California -- Stanford scientists have discovered that some purple sea urchins living along the coast of California and Oregon have the surprising ability to rapidly evolve in acidic ocean water â a capacity that may come in handy as climate change increases ocean acidity. This capacity depends on high levels of genetic variation that allow urchins' healthy growth in water with high carbon dioxide levels.

The study, co-authored by Stephen Palumbi, a Professor in marine sciences and the director of Stanford's Hopkins Marine Station, reveals previously unknown adaptive variations that could help some marine species survive in future acidified seas.

"It's like bet hedging," said Palumbi, a senior fellow at the Stanford Woods Institute of the Environment. "Betting on multiple teams in the NCAA playoffs gives you a better chance of winning. A parent with genetic variation for survival in different conditions makes offspring that can thrive in different environments. In an uncertain world, it's a way to have a stake in the Final Four."

Increasing acidification is a worrisome question for the billion people who depend on the ocean for their sustenance and livelihoods. Which sea creatures will survive in waters that have had their chemistry altered by global carbon dioxide emissions from fossil fuels?

The authors, including collaborators at the University of California Davis' Bodega Marine Lab, speculate in a research paper published in the Proceedings of the National Academy of Sciences that other marine species that have long dealt with environmental stresses may have a similar adaptive capacity.

If true, these capabilities could provide important clues about how to maintain robust marine populations amid the effects of acidification, climate change, overfishing and other human impacts.

Scientists have known for decades that high carbon dioxide emissions from fossil fuels are increasing the levels of carbonic acid in the world's oceans, leading to increased acidity. Hundreds of undreddhof studies have shown that acidification at levels expected by the year 2100 can harm ocean life.

But little is known about marine species' capacity to adapt evolutionarily to this condition. The delicate embryos of marine species are especially susceptible. The West Coast oyster farm industry nearly collapsed in 2007 because of oyster larvae sensitivity to increased acidification of coastal waters.

The study examined how purple sea urchins â creatures with the most well-studied genome of any marine species â react to the acidification levels predicted for 2100.

The researchers raised larvae in ocean water with either low or high carbon dioxide content. They sampled the larvae at early and later stages in life and then used new DNA-sequencing and analytical tools to determine which elements of the urchins' genetic makeup changed through time in these conditions. By looking at the function of each gene that changed, researchers were able to pinpoint which types of genes were critical for survival under future conditions.

"The high CO2 larvae showed almost no negative effects, and that was a surprise," said Melissa Pespeni, the study's lead author and a former Stanford postdoctoral fellow. "They didn't suffer because among them were some individuals with the right genes to be able to grow well in those harsh conditions."

Purple sea urchins, like other West Coast marine species, normally live in cold water that wells up along the coast, bringing seasonally higher CO2 levels. The study's results suggest that this long-term environmental mosaic has led to the evolution of genetic variations enabling purple sea urchins to regulate their internal pH level in the face of elevated carbon dioxide.

"There are hundreds of West Coast species that similarly evolved in these conditions. Maybe some of these have the genetic tools to resist acidification, too," Palumbi said. "We need to learn why some species are more sensitive than others."