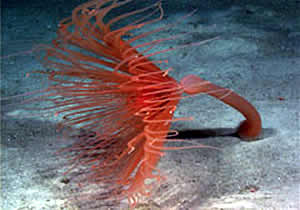 SAN DIEGO, California -- Lying beneath the ocean is spectacular terrain ranging from endless chains of mountains and isolated peaks to fiery volcanoes and black smokers exploding with magma and other minerals from below Earth's surface. This mountainous landscape, some of which surpasses Mt. Everest heights and the marine life it supports, is the spotlight of a special edition of the research journal Oceanography.

These massive underwater mountains, or seamounts, are scattered across every ocean and collectively comprise an area the size of Europe. These deep and dark environments often host a world teeming with bizarre life forms found nowhere else on Earth. More than 99 percent of all seamounts remain unexplored by scientists, yet their inhabitants, such as the long-lived deepwater fish orange roughy, show signs of habitat destruction and over exploitation from intense international fishing efforts.

Scientists from Scripps Institution of Oceanography at UC San Diego and colleagues from the National Oceanic Atmospheric Administration, Oregon State University, University of British Columbia and Woods Hole Oceanographic Institution were among those who contributed their expertise in seamount chemistry, physics, geology, hydrology, oceanography, biology and fisheries conservation to this special interdisciplinary effort to delve into the extremely broad research supported by seamounts and to communicate the science and threats facing them to the public.

"One of the key goals of this special issue was to bring together the extremely diverse seamount research community that ranges from fisheries science and conservation all the way to mantle geochemistry," said Hubert Staudigel a research geologist at Cecil H. and Ida M. Green Institute of Geophysics and Planetary Physics at Scripps and the lead guest editor of the special issue. "In my eyes, this volume of Oceanography goes beyond that by presenting amazing new research in a way that the public can understand and get excited about."

"This issue of Oceanography offers a broad perspective on seamount research of all major disciplines to raise awareness of the diversity of seamount research and to promote collaboration among seamount scientists," wrote the editors of the issue, which represents the most comprehensive volume of peer-reviewed research on the subject to date.

"I was pleased to see how many of the contributions in this special issue deal with very practical and societally important issues of seamounts," said U.S. Geological Survey Director Marcia McNutt.

This Oceanography issue is the result of the work of a National Science Foundation-funded biogeoscience research coordination network organized by Staudigel and the co-editors of the volume. This comprehensive synthesis will establish new collaborations between scientists while at the same time offer a unique educational opportunity for the public to learn about an important feature on Earth that remains vastly unexplored.

The online edition is free and available today and the print edition will be available on March 10.