Archaeologists: Irish Medieval Fishing Site Will Be 'Lost To The Tide' 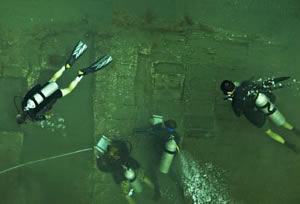 A team of leading U.S. archaeologists study the wreckage of a ship they believe to be part of Captain Henry Morganâs lost fleet. credit Chris Bickford

NORWALK, Connecticut -- A team of leading U.S. archaeologists have discovered the wreckage of a ship they believe to be part of Captain Henry Morgan's lost fleet at the mouth of the Chagres River in Panama.

Near the Lajas Reef, where Morgan lost five ships in 1671, including his flagship "Satisfaction," the team uncovered roughly 52x22 feet of the starboard side of a wooden ship's hull and a series of unopened cargo boxes and chests encrusted in coral. The artifacts were buried deep beneath a thick layer of sand and mud.

The underwater research team, comprised of leading archaeologists and divers from Texas State University, including volunteers from the National Park Service's Submerged Resources Center and NOAA/UNC-Wilmington's Aquarius Reef Base, located the shipwreck with the help of a magnetometer survey, an underwater archaeological technique used to locate anomalies in the magnetic field below the surface of the water.

Due to the shallow waters and close proximity to the coast, treasure hunters have stolen many of the artifacts of monetary value, like gold coins, from the surrounding areas. In an attempt to help save the historic site from looting, the dive team is working closely with the Panamanian government to study and carefully preserve artifacts, which are an integral part of Panama's history and heritage.

"For us, the real treasure is the shipwrecks themselves, which can give us the ability to accurately tell the story of a legendary historical figure like Captain Henry Morgan," said Frederick "Fritz" H. Hanselmann, underwater archaeologist and Research Faculty with the River Systems Institute and the Center for Archaeological Studies at Texas State University. "Discoveries of this nature allow us to study these artifacts and teach others what life was like for these famous privateers more than three hundred years ago."

In the 17th century, Captain Henry Morgan sailed as a privateer on behalf of England, defending the Crown's interests and pioneering expeditions to the 'New World.' In 1671, in an effort to capture Panama City and loosen the stronghold of Spain in the Caribbean, Morgan set out to take the Castillo de San Lorenzo, a Spanish fort on the cliff overlooking the entrance to the Chagres River, the only water passageway between the Caribbean and the capital city. Although his men ultimately prevailed, Morgan lost five ships to the rough seas and shallow reef surrounding the fort.

In September 2010, the team recovered six iron cannons from a nearby site also believed to be from one of the notorious Welsh privateer's ships. Additional funding was needed to explore the surrounding sites in search of the lost ships. It was at this time that the Captain Morgan rum brand, which took its inspiration from the legendary privateer, provided the dive team with a grant enabling them to continue their research.

"Captain Henry Morgan was a natural-born leader with a sense of adventure and an industrious spirit that the brand embraces today," said Tom Herbst, Brand Director, Captain Morgan USA. "When the opportunity arose for us to help make this discovery mission possible, it was a natural fit for us to get involved. The artifacts uncovered during this mission will help bring Henry Morgan and his adventures to life in a way never thought possible."

Artifacts excavated by the dive team in 2010, including the six cannons, as well as any future relics will remain the property of the Panamanian government and will be preserved and displayed by the Patronato Panama Viejo.