Study: Some Fish Do Not Respond Well To Relocation; 'Fish Of The Same Kind Are Distinct' 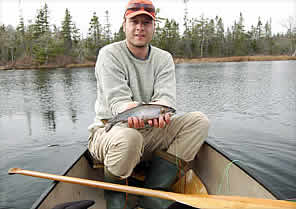 MONTREAL, Quebec -- Not all trout are created equal. Those swimming up the streams of British Columbia might resemble their cousins from Quebec, yet their genetic makeup is regionally affected and has an impact on how they reproduce, grow and react to environmental stressors.

Such regional variance makes transplanting fish species â to bolster dwindling populations â tricky business. These are some of the findings of a compelling review published in Heredity, a journal from the Nature Publishing Group, which examined the adaptability of trout, salmon, char, whitefishes and graylings across North America and Europe.

"We can't treat a species as something that is homogeneous throughout its range. Fish of the same kind are distinct, whether they grow in lakes, ponds or streams," says first author Dylan J. Fraser, a Concordia University biology professor.

"A salmon from Quebec isn't the same as a salmon from the Atlantic provinces or an individual of the same species from Europe," he continues. "There's considerable variation within species. That genetic diversity can allow a specific type of fish to thrive in one region â to better adapt to stressors such as climate change or habitat changes â while fish stocks of the same species introduced from another region can dwindle."

Economic implications Since trout, salmon, char, whitefishes and graylings are important for commercial fishing, recreational fishing and aquaculture industries, Fraser says this review has economic implications for business or conservation programs looking to transplant species into new habitats for a variety of purposes.

"Salmon from Quebec, for instance, should not be reintroduced into British Columbia streams," says Fraser. "For fish to successfully adapt to a new environment, they should be selected by geographic proximity."

The result? "Climate change will have a profound effect on species," says Fraser. "And understanding why local populations outperform foreign populations in their home environment may help to predict which populations within species are most likely to persist in the future.'"