Researcher: Diver's Breathing Could Be Used To Thwart Underwater Attack

New 'Revolutionary' Underwater Breathing Device Revealed; 'The Greatest Thing In the Industry In a Long Time' 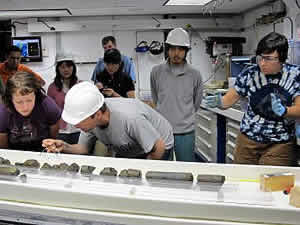 Researchers have recently documented that oxygen is disappearing from seawater circulating through deep oceanic crust, Photo by Jen Magnusson.

EAST BOOTHBAY, Maine -- Although long thought to be devoid of life, the bottom of the deep ocean is now known to harbor entire ecosystems teeming with microbes. Scientists have recently documented that oxygen is disappearing from seawater circulating through deep oceanic crust, a significant first step in understanding the way life in the "deep biosphere" beneath the sea floor is able to survive and thrive. The new research findings were published in the journal Nature Communications on September 27, 2013, and are helping to redefine our concepts of the limits of life on our planet.

A team of researchers led by Dr. Beth Orcutt of the Bigelow Laboratory for Ocean Sciences used the JOIDES Resolution, a sophisticated 470-foot scientific drilling vessel operated by the international Integrated Ocean Drilling Program (IODP), to sample the muddy and sandy sediments that blanket the rocks on the seafloor, as well as drill into the hard crustal rocks themselvesâ considered by many to be the largest reservoir of life on Earth â in order to understand how microbes can "breathe" and get the energy necessary to live in this remote environment.

"Our computer models showed that the crustal oxygen concentrations in the region were most likely the result of microbial life forms scavenging oxygen in the crust as seawater moves through fractures and cracks deep in the rocks," said Orcutt. "Under the cold conditions of the crust in this area, purely chemical oxygen consumption is minimal, which suggests that microbes in the oceanic crust are responsible for using the oxygen that's down there."

"We know there's a vast reservoir of life in the ocean crust, but unless we take steps to quantify its metabolism, we'll never know how vast it is," said co-author Dr. Sam Hulme, from Moss Landing Marine Laboratories.

Another co-author of the paper, Dr. Geoff Wheat of the University of Alaska Fairbanks, pointed out that chemical composition of seawater within pore spaces between sediment grains provides important information about what reactions occur there and how fast they happen. "This result sets the stage for more directed experiments to understand how microbes use the oxygen for growth in a place with little food," Wheat said.

"One of the biggest goals of the international scientific ocean drilling research community is to understand how life functions in the vast 'deep biosphere' buried alive below the seafloor, but it's very challenging to access and explore the hard rocks that make up the base of the seafloor," Orcutt added. "Our results are the first to document the removal of oxygen in the rocky crustal environment â something that had been expected but not shown until now. With this information, we can start to unravel the complex mystery of life below the seafloor."

"Detecting life by measuring oxygen in subseafloor environments with vigorous seawater flow is not an easy task," agreed Dr. Wolfgang Bach, a scientist at the University of Bremen in Germany, and another coauthor of the paper. "Imagine an extraterrestrial life-detection task force landing on Earth with oxygen probes as the only life-detection tool. If they ended up in a well-ventilated meeting room stuffed with delegates, they'd conclude from the measurements they'd be making that respiration was minimal, hence life is slow, if not absent. Doing these measurements in an environment where we think we know the direction of flow of seawater and detecting a gradient in oxygen makes all the difference in making inferences about subseafloor life."

"Tiny microbial life on Earth is responsible for big tasks like global chemical cycling. In order to understand how important elements like oxygen â which we all need to breathe â move around Earth, we need to understand how quickly it is consumed in the largest aquifer on Earth, oceanic crust," said Orcutt.