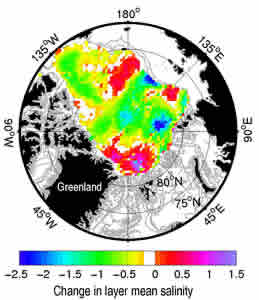 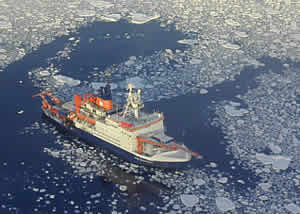 BREMERHAVEN, Germany -- The freshwater content of the upper Arctic Ocean has increased by about 20 percent since the 1990s. This corresponds to a rise of approximately 8,400 cubic kilometers and has the same magnitude as the volume of freshwater annually exported on average from this marine region in liquid or frozen form. This result is published by researchers of the Alfred Wegener Institute in the journal Deep-Sea Research. The freshwater content in the layer of the Arctic Ocean near the surface controls whether heat from the ocean is emitted into the atmosphere or to ice. In addition, it has an impact on global ocean circulation.

Around ten percent of the global mainland runoff flows into the Arctic via the enormous Siberian and North American rivers in addition to relatively low-salt water from the Pacific. This freshwater lies as a light layer on top of the deeper salty and warm ocean layers and thus extensively cuts off heat flow to the ice and atmosphere. Changes in this layer are therefore major control parameters for the sensitive heat balance of the Arctic. We can expect that the additional amount of freshwater in the near-surface layer of the Arctic Ocean will flow out into the North Atlantic in the coming years. The amount of freshwater flowing out of the Arctic influences the formation of deep water in the Greenland Sea and Labrador Sea and thus has impacts on global ocean circulation.

Dr. Benjamin Rabe from the Alfred Wegener Institute for Polar and Marine Research in the Helmholtz Association and his colleagues have evaluated a total of over 5,000 measured salt concentration profiles. To measure the depth distribution of the salt concentration, researchers used sensors from ships or mounted sensors on large ice floes so the data were recorded during the ice drift through the Arctic Ocean. Furthermore, measured values from submarines were inputted in the analyses. Major portions of the data stem from expeditions during International Polar Year 2007/2008.

"The well coordinated research programs in the Arctic have substantially improved the database in these difficult to access areas," reports Rabe, who will again sail to the central Arctic on the research vessel Polarstern in the coming summer. The dense network of observations in recent years made it possible for the first time to come up with a comparative assessment of the freshwater content in the Arctic Ocean.

Rabe and his colleagues have published the increase in the freshwater content between the periods 1992 to 1999 and 2006 to 2008 in the journal Deep-Sea Research. "The considerable changes in the upper water layers primarily comprise a decline in salt concentration," says Rabe. Another, though minor, effect is that the low-salt layers are thicker than before. The freshwater content of the Arctic Ocean may rise due to increased sea ice or glacier melt, precipitation or river inputs. Less export of freshwater from the Arctic â in the form of sea ice or in liquid form â also results in a rise in the freshwater content. The authors of the study point to altered export of freshwater and altered inputs from near-coastal areas in Siberia to the central Arctic Ocean as the most probable reasons.

Dr. Michael Karcher from the Alfred Wegener Institute, co-author of the study, simulated the observed processes using the NAOSIM coupled ocean/sea ice model. The model experiments make it possible to study longer periods, i.e. to map times for which no measurement data are available. The model also supplies important insights into the causes of the rising and falling freshwater content and points out the great significance of the local wind field. Measurements and the model additionally show that the changes in the Arctic freshwater content encompass far larger areas than assumed to date.