Paradise Lost: Shark Finners Threaten Biologist In Puntarenas, Costa Rica; 'We Only Ask That The Law Be Respected' 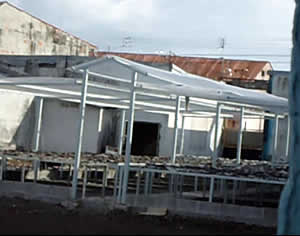 Shark fins drying at a dock in Puntarenas, Costa Rica

PUNTARENAS, Costa Rica -- On Saturday, January 8th Pretoma biologist Jorge Ballestero was threatened by a group of 5 individuals in Puntarenas while he tried to responded to a call alerting the public that a large quantity of shark fins were being dried with apparently no regard for health or other operational permits at a dock located on the east side of the city's Municipal Market.

After confirming the large number of fins drying on racks and on the dirt floor, Ballestero tried to video tape the scene when he was approached by the mob and forced to flee into the market. While there, Ballestero was pushed, threatened, and told to give up his camera. Fortunately a police car passed by the area and he was able to get officials Carrillo and Casanova's attention. At this point the assailants quickly abandoned their aggressive behavior and began blaming Ballestero for stirring up the trouble. Incredibly, the officers sided with the aggressors and told him to present his ID and explain what he was doing in the area. While this was going on, the officers did not let him turn on the camera to document the incident, whereby violating some of his basic civil rights and constituting a blatant abuse of authority.

"Incredibly, the police treated me like I was the perpetrator", said a deceived Ballestero. "We only ask that the law be respected, one that's based on the best scientific information available to foment the conservation and sustainable use of our marine resources, and we will never accept these aggressions and abuses against our work to get shark finners to comply with the public's interest", asserted Ballestero. "Recently, the famous chef Gordon Ramsay from the United Kingdom suffered a similar attack in Puntarenas while trying to document shark finning activities at a private dock", said Pretoma's Randall Arauz. "The message is clear â if you approach a dock with your camera in Puntarenas where shark finning happens, it's likely you'll be attacked and your camera violently taken from you", lamented Arauz.

Though Ballestero wasn't able to get any of the events on video, Puntarenas environmentalist William Flores has provided the video he shot a day before outside the same installations.