Study: Global Sea Rise Beyond 6 Feet 'A Near Physical Impossibility' 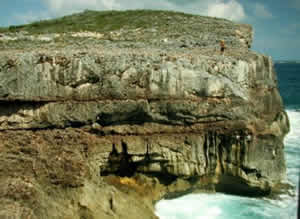 Scientists offer a new explanation for why ancient beach deposits on these cliff tops in the Bahamas, are nearly 70 feet above present day sea levels

NEW YORK, New York -- The seas are creeping higher as the planet warms. But how high will they go? Projections for the year 2100 range from inches to several feet, or more. The sub-tropical islands of Bermuda and the Bahamas contain important sites where researchers have gone looking for answers; by pinpointing where shorelines stood on cliffs and reefs there during an extremely warm period 400,000 years ago, they hope to narrow the range of global sea-level projections for the future.

After correcting for what they say were the sinking of the islands at that time, a new study in the journal Nature estimates the seas rose 20 to 43 feet higher than todayâup to a third less than previous estimates, but still a drastic change. The new study infers that Greenland and West Antarctica ice sheets collapsed at that time, but not the even bigger East Antarctic Ice Sheet.

Average global sea level has risen eight inches since the 1880s. It is currently rising an inch per decade, driven by thermal expansion of seawater and melting of glaciers and ice sheets, including the still mostly intact ice sheets of Greenland and West Antarctica. In its most recent report, the Intergovernmental Panel on Climate Change estimated that the seas could rise up to two feet by 2100; but that number could go higher depending on the amount of polar ice melt, and quantity of greenhouse gas emissions by humans. The United Nations estimates that five feet of sea-level rise would be enough to swamp 17 million people in low-lying Bangladesh alone.

The cliffs and ancient reefs on Bermuda and the Bahamas have attracted fossil hunters for decades, and more recently, scientists investigating global sea level. In a 1999 study in the journal Geology, Paul Hearty, a scientist at the University of North Carolina, Wilmington, estimated that during the period 400,000 years ago, the seas rose nearly 70 feet, in between glacial periods. He hypothesized that the East Antarctic ice sheet must have partly melted to produce such a rise. In 2007, University of Hawaii scientist Gary McMurtry offered a competing hypothesis in the journal Sedimentary Geology: that a mega-tsunami generated by a collapsing volcano off the Canary Islands created the high-water mark.

The new study comes up with a different take. It factors in the loading and unloading of ice from North America during the ice ages preceding the sea-level rise. As the ice sheets grew, their weight pushed down the land beneath them, while causing land at the edges of the continentâincluding Bermuda and the Bahamas--to bulge up, says Raymo. When the ice pulled back, the continent rebounded, and the islands sank.

"Bermuda and the Bahamas are not a pristine measure of the volumes of ice that melted in the past, because they're contaminated by effects left over from the ice ages," said study coauthor Jerry Mitrovica, a geophysicist at Harvard University.

The study's revised estimate of 20 to 43 feet makes sense, said sea-level rise expert Mark Siddall, a climate scientist at the University of Bristol who was not involved in the study. But, he added, it would probably take hundreds to thousands of years for such a rise to occur again. "We're moving from a place of disagreement about sea level estimates from this past period to one consistent theory that reconciles data from diverse geographic areas," he said.