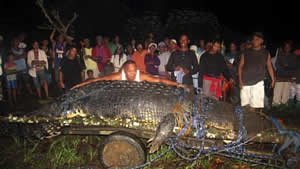 Mayor Cox Elorde of Bunawan township, Agusan del Sur Province, measures up a huge crocodile which was captured by residents and hunters.

Philippine villagers and veteran hunters have captured a massive 21-foot, one-ton crocodile in Barangay Nueva Era, Bunawan, Agusan del Sur Saturday night. The beast is said to be one of the largest ever captured alive in the country.

The female crocodile was snared after a three week hunt, which the monster was implicated in attacks on villagers and water buffalo. After initial sightings at a creek, hunters set four traps, which the crocodile promptly destroyed. They then used sturdier traps using steel cables, one of which finally caught the enormous reptile late Saturday.

The entrapment was led by Mayor Edwin Elorde, who said the reptile would turn "from a threat into an asset". There are plans to put it on display in a planned ecotourism park.

In the meantime, the staff of Philippine Crocodile-Manila is currently checking on the animal, which was temporarily placed in a pen.