Scripps Oceanography To Build Marine Lab; 'We Are Grateful For This Vote Of Confidence' 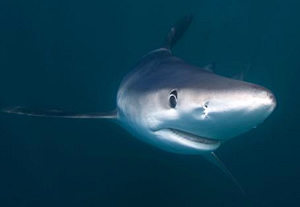 he blue shark is one of the most commonly caught sharks in Chilean fisheries. Credit: Karin Leonard, Marine Photobank.

WASHINGTON, D.C. -- Matt Rand, director of global shark conservation for the Pew Environment Group, issued the following statement today in response to the Chilean Senate passage of Chile's first-ever ban on shark finning, requiring that ships catching sharks have to land them with their fins naturally attached (meaning that the shark's whole body must be taken to port). The Chamber of Deputies is expected to begin consideration of the bill in a few weeks.

"By this vote, the Chilean Senate is ending the wasteful practice of shark finning. Once agreed to by the Chamber of Deputies and signed into law, this ban will have positive impacts for marine life far beyond the southern cone of South America.

"Around the globe, up to 73 million sharks are killed every year primarily for their fins, which are most often consumed in Asia in shark fin soup. Sharks grow slowly, mature late and produce few young over long lifetimes; this unsustainable fishing practice is decimating shark populations worldwide and disrupting the balance of life in the world's oceans.

"Chilean waters, fed by the Humboldt Current, are known for the diversity of their marine life. An estimated 53 shark species live in these waters; we applaud the Senate for protecting these important animals and securing the future of the marine environment that they inhabit."