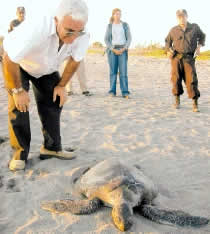 The governor of Usulután, Julio Caesar Vaquerano, observes the corpse of a turtle

More dead turtles were found yesterday in San Juan of the Joy, Jiquilisco, Usulután, a finding that was verified by technicians of the Ministry of Medioambiente and Recursos Naturales (MARN).

The finding took place in a beach near Island of Méndez here last Friday where 25 turtles were confirmed dead.

"I can say that they are more than 70 turtles found in four different beaches (the Icacal, the Cuckoo, Island of Méndez and San Juan of the Joy) from last Tuesday", a spokesman of the MARN said.

Ernesto Lopez Zepeda of the MARN hopes that the corpses can help explain the cause of the death of the turtles, since the previous ones did not help much.

"We thought that the cause of death is by the fishing fleet, but we do not know if of drag or tunny boats", emphasized Lopez. However, there has not been a firm cause of death established.

For Lopez, the impact to the populations of turtles is serious and significant.

Recently David Falkenstein, a US citizen visiting family in El Salvador, reported seeing dead turtles throughout a eight-hour fishing trip some 40 miles off the coast. Falkenstein pleaded "I am not sure anyone down there understands that there are hundreds and possibly thousands more dead or dying turtles out at sea."