NBA Star: 'There Are No Such Thing As Shark Attacks' 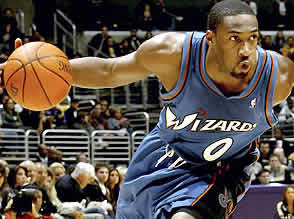 MIAMI, Florida -- NBA star and blogging "superstar" Gilbert Arenas has come out against shark attacks. Actually, Arenas denies there are such things as "shark attacks" in his latest blog entry.

We’re humans. We live on land.

When I see on the news where it’s like, “There have been 10 shark attacks,” I’m like, “Hey, for real?! They’re just running around? Sharks are walking now, huh! We live on the land, we don’t live underwater.”

You can find Gilbert Arenas's blog on the NBA.com official site.